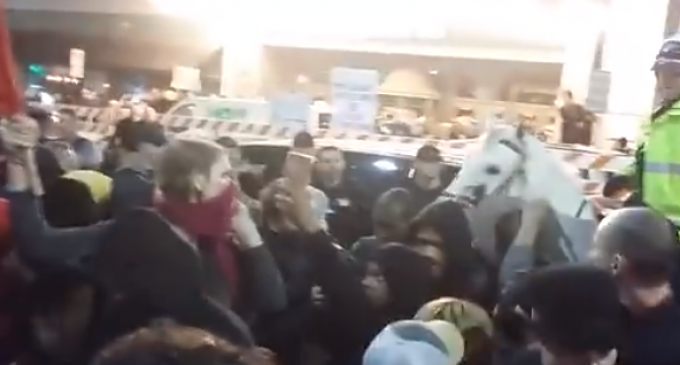 Anti-Trump protestors have certainly created a hostile environment for Trump supporters and problems for the man himself. Not only are their “peaceful” demonstrations not peaceful, they've contradicted themselves in so many ways that it's impossible to keep track.

The liberal idea of tolerance and peace is one that doesn't hold up well under scrutiny. Anti-Trump protestors call Trump and his supporters violent, intolerant and bigoted. Okay, what about their protests?

If you watch the video on the next page, where a transgendered individual assaults a police officer's horse, you might see things in a different light.

Waving a giant flag, April J. Foster, a 29-year-old who identifies as a transgendered commie feminist, was caught on camera yelling at a horse and trying to scare it away as police officers attempted to defuse a hostile situation at a  Donald Trump protest. When yelling didn't work, she slapped the horse and tried to run away. Though she initially escaped, she was later charged with the abuse of a police animal. Even PETA was disgusted with her.