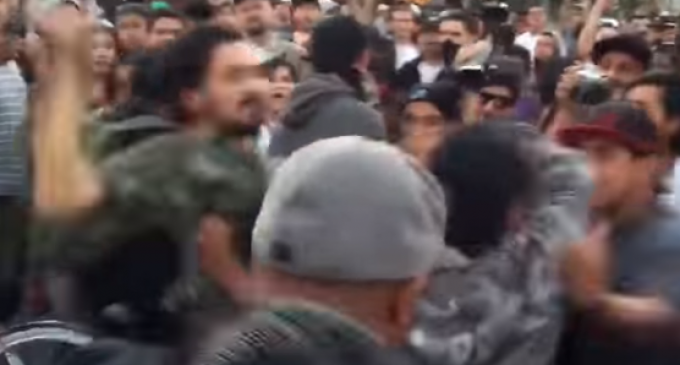 The mainstream media has long blamed Donald Trump supporters for the violence that occurs at his rally.  If you turn on CNN or flip open an issue of the Washington Post, you are likely to read about all of the violent, angry white folks attacking innocent, peaceful minority protestors.  If you actually go and cover a Donald Trump rally — as this correspondent has — you will witness something very different.

When two Truth and Action writers covered Donald Trump's rally in Anaheim, CA last month, we witnessed a very spirited, but peaceful atmosphere inside.  Outside the Anaheim Convention Center was a rather different story.  With our press credentials around our necks, we were mostly left alone by the protestors, but it was open season on anyone openly supporting Trump.  Ultimately it took a barrage of tear gas canisters from an enormous police presence to disperse the violent anti-Trump crowd.

If our readers needed more evidence that it is the anti-Trump protesters inciting violence at campaign rallies, the video on the next page confirms it.  To watch what happens when two groups of pro-Bernie Sanders supporters mistake one another for Donald Trump supporters, continue reading on the next page: