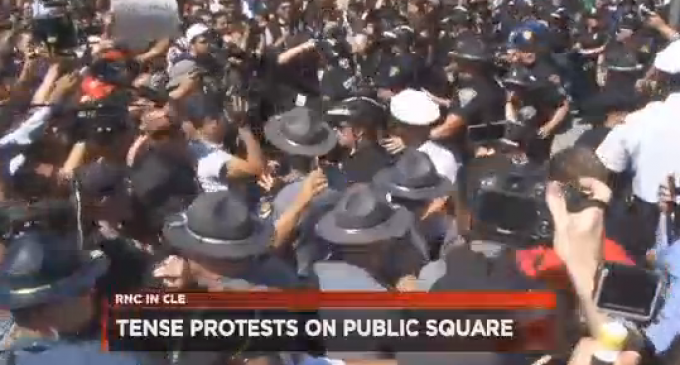 What do the Westboro Baptist Church, the KKK and Black Lives Matter have in common?  They are disreputable, uncivilized groups that threw urine at each other, resulting in the police stepping in to keep the peace, a few blocks from the Republican National Convention.

Though there are no reports of arrests or injury, the fracas began when Alex Jones of Info Wars began speaking in the Public Square.  Jones was taken away by police to safety, as the crowd crushed in.

The unrest continued and more bicycle officers formed a line to separate “a conservative religious group and a communist-leaning organization carrying a sign that read, “America Was Never Great.””

The police outnumbered the demonstrators and protesters were kept separated by a five line formation of hundreds of officers.

Read more about demonstrators on the following page and the various groups that are there to stir up conflict and protest.