You really have to feel bad for the Democrats.  The Fake News Industrial Complex (FNIC) is setting them up for another big letdown in the form of allowing them to believe that the next scheme to remove Donald Trump from office actually has merit.  They have tried a Fake News story on the Russian collusion, they’ve tried to call the election delegitimate because he didn’t win the popular vote, they’ve even gone so far as to cheer on Jill Stein and Hillary Clinton as they attempted to get a recount going.  They also enlisted the help of the United Liberal Celebrities Effecting Results (ULCER) who made videos and pitched tearful pleas to the American voter imploring delegates to change their votes for the Electoral College.

All these scams to try to wrest control of the government, not in the ballot box, but in the courtrooms and government halls, have been initiated by the Democrats.   Unfortunately for the liberal voters, they’re pinning their hopes once again on the FNIC to build them up to levels of frenzied insistence and are liable to pop off once again like Stephen Paddock did not long ago in Las Vegas.  These people are dangerous and unhinged.  Look at the Antifa groups in Berkeley, Portland and Charlottesville.  How about the Black Lives Matter groups who have been calling for the assassinations of cops? 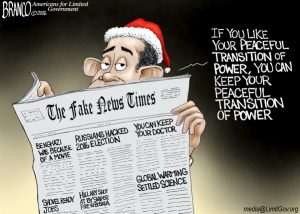 There are no two ways about it, the Left is grasping at straws in any way they can right now.  What is the newest scheme that the Liberals think they’ll be able to invoke?  A little piece of the Constitution called the 25th Amendment.  Turn to the next page to read about how the Left is throwing everything AND the kitchen sink at the president in an attempt to oust him from office!