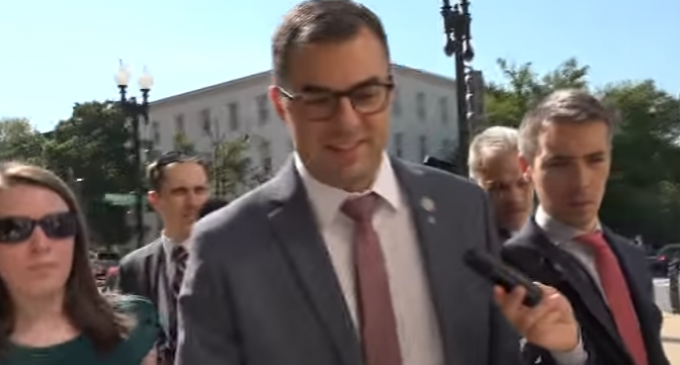 The mainstream media is jubilant today as word is released by The Hill that some Republicans are beginning to whisper the big “I”-word when it comes to Trump's behavior as of late.  Of course, The Hill is about as Right-leaning as NPR, so that's not really saying much.  And for the MSM to be so gleeful about Republicans eating their young, it only means one thing:  the Republicans being featured are 100% card-carrying Establishmentariat members.

I'd like to talk about these three Republicans who have suddenly developed a conscience and a moral compass that is set to stun, directly on the heels of a “bad couple of days” in the Liberal news cycle of the mainstream media.

Republicans are beginning to talk of the possibility that President Trump could face impeachment after reports that he pressed ousted FBI Director James Comey to end an investigation of former national security adviser Michael Flynn.

While Republican are choosing their words carefully, the fact that impeachment is even being mentioned is notable in Washington's polarized political environment.

Rep. Justin Amash (R-Mich.) on Wednesday said if the reports about Trump's pressure on Comey are true, it would merit impeachment.

Amash spoke a day after The New York Times on Tuesday reported that Trump tried to pressure Comey to stop investigating Flynn.

According to a memo written by Comey after the February meeting, the president told Comey “I hope you can let this go.”

Asked by The Hill if the details in the memo would merit impeachment if they're true, Amash replied:  “Yes.”

Before I begin talking about Amash, I want to address this memo business.  The way that this and every other MSM story regarding the memo is being portrayed is that they are in possession of said memo and are then commenting upon it.  However, if all reports are correct, this memo has never surfaced.  The story originally appeared in the New York Times and mentioned the memo through a “former and current official” of the intelligence committee.  It is assumed that this “current official” was an associate of Comey, who then leaked the contents of the memo (that has not been actually read by the MSM) to the “former official” who then spoke with anonymity to the New York Times.  And now, that memo that has been the crux of this feeding frenzy, is the subject of every MSM piece in the news regarding impeachment.  Therefore, I take exception to the usage of this “memo” as the carved-in-stone, smoking-gun evidence that Trump did anything wrong at all.

Granted, the whole purpose of this story being leaked was not to impeach President Trump, but ultimately to slow down his breakneck-speed policy enforcement.  Obama's Department of Shadowy Endeavors (DSE) is hard at work attempting to pour molasses in the boots of the Trump administration and, so far, the mission is successful.  The administration is so focused these days on the scandals as to be almost completely ground to stand still.

But, enough of that.  Let's talk skunks.  More precisely, Republicans who are the modern-day turncoats.