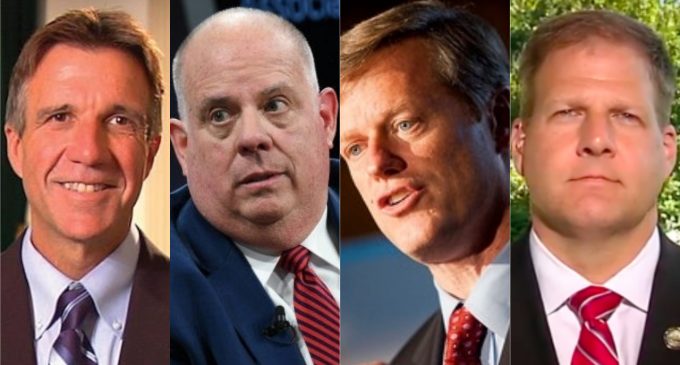 In late September, Truth and Action published an article detailing two Republican governors from very Blue States who went public with their proclamation to the mainstream media that they would just love to see President Donald Trump impeached.

The two governors at the time were Charlie Baker from Elizabeth Warren’s home state of Massachusetts, and Phil Scott from Bernie Sanders’ home state of Vermont. The two governors went on the record with the press in an effort to out-do each other in the realm of who-hates-Trump-more-than-me! As it turns out, they hate Trump equally, which essentially translates to the fact that they also despise the American people who voted for him.

It would seem that this was more of a cowardly act on the parts of both Baker and Scott, that they would bash Trump and his supporters in the hopes of remaining in the Progressive clubs of Massachusetts and Vermont. Imagine for a moment if the two of them had the courage to actually stand with the American people and Trump and state their opinions publicly. We’re pretty sure that they wouldn’t hold their current jobs very long in the Land of Liberalism.

At the time, we also wondered about other GOP governors across the nation who happened to head Blue States of their own. We came up with only two; Chris Sununu of New Hampshire and Larry Hogan of Maryland.

We now have our answer on both counts. Turn to the next page to read about how these two governors have chosen to voice their opinions over the current impeachment process against our president, Donald J. Trump!