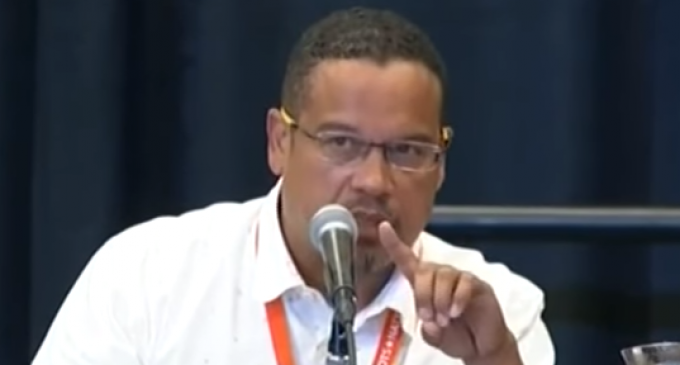 The first Muslim elected to Congress, US Representative Keith Ellison (JA-MN), has done and said some really stupid things.  But he's a member of the Party of the Jackass, so it's pretty much expected that he'd be opening his mouth and inserting both feet on a regular basis.

This is a man who despises the United States of America almost as much as Barack Hussein Obama, but more than Maxine Waters (because, let's face it, where else would she be able to be gainfully employed at that salary?)

As it turns out, Ellison was invited to speak at the very prestigious (prestigious, that is, IF you're a flaming Liberal) Netroots Nation Annual Conference event that has been host to some of the most hateful, racist, bigoted, and odious human beings ever to grace the cover of Time and Newsweek magazines; luminaries such as Harry Reid, Nancy Pelosi, Bill Clinton, Barack Hussein Obama, Howard Dean, Barbara Boxer, Hillary Clinton, John Edwards, Al Gore, Van Jones, Valerie Jarrett, Al Franken, Elizabeth Warren, Debbie Wasserman-Schultz, Luis Gutierrez, Paul Krugman, Rich Trumka, Martin O'Malley, and Bernie Sanders!

The 2017 conference was like no other, however, because there was a new villain to “boo!”  No longer did the specter of the evil George W. Bush hang over the hall, but now a REAL American nightmare (at least to everyone in attendance):  President Donald Trump!

Read more about Keith Ellison's comments regarding Donald Trump on the next page where he could not even bring himself to utter the president's name, let alone show him an ounce of respect!