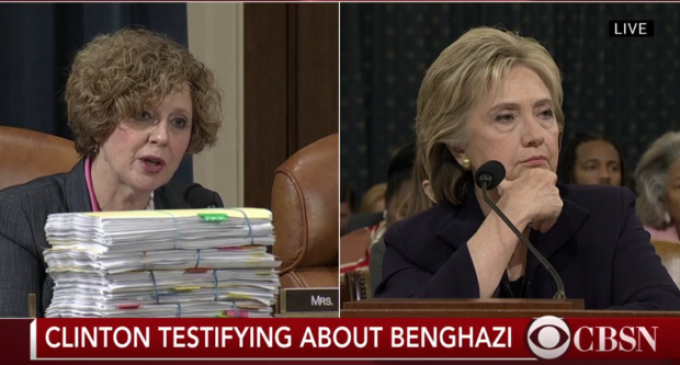 In a eleven hour session before the Benghazi Committee, Hillary Clinton had a few key questions put to her, that visably made her uncomfortable.

One was from Rep. Susan Brooks, was brought two stacks of Hillary's emails.  The stacks, one with over 795 pages, the other with just 67 pages represented the years 2011 and 2012 correspondence between Clinton and Mission Benghazi.  Brooks forcefully made her point, asking why so many emails in 2011 versus 2012?

Brooks also questioned Clinton as to the primary reason for Stevens going to Benghazi, what was his mission?  There has been much speculation as to the real reason Stevens was placed in Benghazi.  There has been credible evidence that Mission Benghazi was a front for gun running.  From Benghazi, into Syria to arm the Syrian rebels.

But the question remained, why the decline in interest or correspondence in 2012, the year which the Ambassador's residence in Benghazi was attacked.

More on Clinton and her response to Mission Benghazi