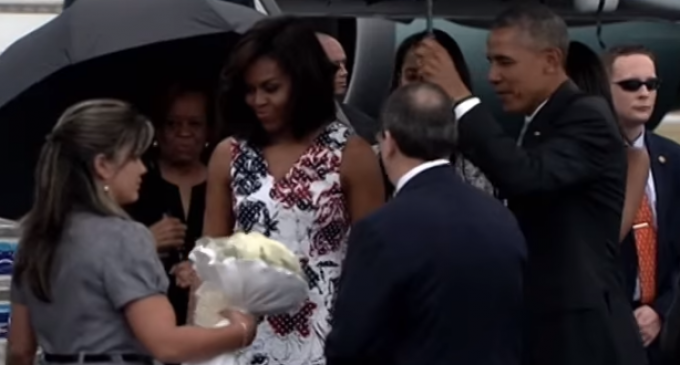 President Obama continues to be pushed around by world leaders who respect neither him nor the country that he is tasked with representing.

After years of backdoor negotiations, Obama finally visited Cuba after the communist nation resumed relations with the US after 50 years. No sitting American president has set foot on the island since Fidel Castro and his cohorts took over the Caribbean island and imposed a socialist dictatorship just miles away from Florida.

As anyone who been following the matter can tell you, opening Cubaup was a very big deal to Obama, who fancies himself as some sort of peacemaker. To that end, visiting the long-hostile nation would be a major feather in his cap.

But not everyone seemed to think it was a big deal, least of all the Cubans. Indeed, Raul Castro, brother of Fidel and the current ruler of the island, wasn't even there to greet Obama when he touched down in Havana.

This marks the second time Obama has been snubbed by a sitting head of state within a week. Just days ago, Obama flew to London expecting to be received by Queen Elizabeth only to learn she refused to return to Buckingham Palace to greet him, forcing him to drive over 20 miles to see her. Seems like she told Castro that Obama is a pushover:

“The Cuban leader frequently greets major world figures upon their arrival at Jose Marti International Airport, but was absent on the tarmac.

Instead, he planned to greet Obama on Monday at the Palace of the Revolution.

Castro’s perceived snub was noticed by many people, including one of the men hoping to replace Obama next January:

While there is some debate over whether or not it’s normal for the Cuban leader to appear on the tarmac when another head of state enters the country, Twitchy did note that Castro greeted Pope Francis at José Martí Airport not once, but twice, over the last six months:”