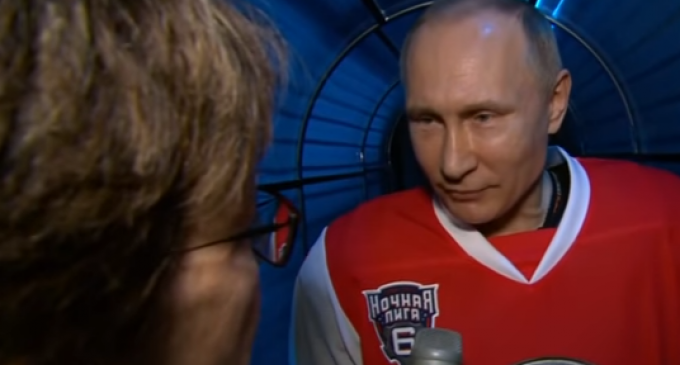 The heat is on for the Liberals and they're making the most out of the situation.  Donald Trump's firing of FBI Director James Comey was a boon for both Leftists and Never Trumpers everywhere.  Since the devastating loss on election night, they've had a severe dry spell.  There have been few opportunities to create drama since election night and the only glimmer of hope was if George Soros had freed up enough spare change to drum up a riot or two.

Now with the “Russians-hacked-the-election” hysteria at its zenith, Liberals are grasping at anything even partially resembling a scandal.  It has devolved to the point where if Trump even wears the wrong tie, he'll be crucified in the media.

The best part of all this is imagining that for a moment that Trump and his staff waited until this moment to fire Comey just so they could witness the fun meltdown of the snowflakes in a grand spectacle.

CBS News' Elizabeth Palmer traveled all the way to Sochi, Russia for an exclusive with Foreign Minister Lavrov, only to be disappointed by a last-minute change of schedule.  Instead of merely canceling and returning to the U.S., the intrepid reporter decided to take in an old timer's hockey game where retired Russian NHL players and President Vladimir Putin would be competing on the ice.  Little did she realize that the Russian president himself would be inviting her for a quick little interview in the tunnel approach to the player's box.

The anchors inside the CBS studios were very excited to be able to introduce the story.  Apparently, a chance to question one of the world leaders in his hockey gear on his way to the ice is the equivalent of being groped by Bill Clinton, because these reporters seemed to be all in a tizzy over the video about to be unleashed.

As Putin and his interpreter made their way toward the reporter and her cameraman, Palmer jumped right into her spiel in an attempt to “blow the lid off this story.”  Except one little problem:  Putin wasn't cooperating in the destruction of Trump.