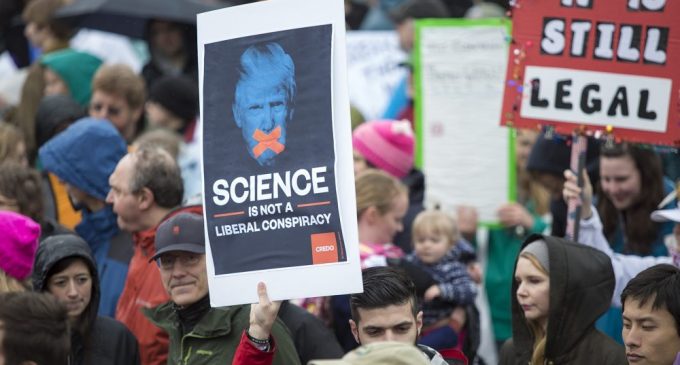 Just last month, scientists walked out on their jobs and took to the streets to protest that heathen Dark Ages president Donald Trump for regarding science as heresy!

In other words, Donald Trump is cutting funding to science projects and the scientists are up in arms about not being able to afford that genetically-superior ergonomic frappaccino mug they’ve had their eye on for the past year!

The Associated Press announced with much fanfare that week that scientists were abandoning their jobs to make their statement public that they were just double-helixed (pissed off) about Trump’s slashing of the science budget.

The protest was putting scientists, who generally shy away from advocacy and whose work depends on objective experimentation, into a more public position.

Organizers portrayed the march as political but not partisan [oh, of course not], promoting the understanding of science as well as defending it from various attacks, including proposed U.S. Government budget cuts under President Donald Trump, such as a 20 percent slice of the National Institute of Health.

So, to be clear, scientists “generally shy away from advocacy” and just putter around in the lab with their Bunson burners and Petrie dishes, right? Sort of like, when Mike Cox, an EPA mouthpiece, went on national radio programs and television to denounce Trump’s newest EPA chief, Scott Pruitt.

According to ThinkProgress (that bastion of Leftist truth), Trump is a running gag over at the EPA.

Team Trump is apparently an open joke to their staff – something even the Reagan and Bush administrations never experienced. [Oh, suddenly Reagan and Bush are not objectionable?] Morale has collapsed, Cox notes.

“I have worked under six administrations with political appointees leading EPA from both parties,” Cox wrote on his last day on the job. “This is the first time I remember staff openly dismissing and mocking the environmental policies of an administration and by extension you.”

All right, so the AP may have been a little off with their “generally shy away from advocacy” comment. What about the next statement that scientists’ work depends on “objective experimentation?”

Here’s just a few of the 2016 “objective” research projects of universities that received millions in grants where “objective” criteria were used:

1. Edith Cowan University professor, Panizza Allmark, received a $530K grant over 4 years to study the “communication of intergenerational welfare dependency.” We shall now definitively know how welfare dependency is positively passed on to the children from their mothers. And we always thought that was a negative thing! Silly Conservatives!

2. Ulmea University researcher, Linda Sandberg, has uncovered that the most unsafe cities for women are those that do not include a “gender equal planning strategy,” because many women feel constrained by their fear of violence in public spaces. Philadelphia and New York must now be deconstructed and reconstructed with lots more open spaces to afford women a “feeling” of more safety.

3. University of Toronto professor, Irina Michalache, has come to the conclusion that the “versatility and rather loose historical associations of cupcakes” have allowed for it to be “appropriated by men!” Cupcakes, argues Michalache, are “both a feminist statement and proof of postfeminist domesticity,” and now those dirty men have gone and started baking them, too!

4. University of South Florida professor, Rachel E. Dubrofsky, says “Miley Cyrus and Talor Swift operate in a post racial context where people of color and racialized aesthetics are featured, but where race itself is unimportant, and racism is a thing of the past.” She extrapolates that Cyrus and Swift produce “White authenticity.” Oh. And here I thought that White people weren’t authentic!

5. University of Minnesota professor, Karisa A. Butler-Wall submitted an article to Disability Studies entitled, “Viral Transmissions: Safer Sex Videos, Disability, and Queer Politics” that explored how “risk reduction techniques [regarding safe sex] have been historically linked to compulsory able-bodiedness, precluding alternative expressions of queer/crip [disabled] life.” Apparently, being gay is now a handicap and is being unfairly targeted by the safe sex community!

7. University of Oregon professor, Mark Carey (recipient of at least $2.3M in 4 different National Science Funding grants) concluded that “relationships among gender, science, and glaciers” have been “understudied.” He is proposing a “feminist glaciology framework.” Question: How do you determine the difference between a male and female glacier? Do we lift their skirts?

Apparently, if you are a government-funded researcher, the more compound words, hyphens, and Liberocentric terminology you use, the better your chances are at grant money being flushed down the toilets of Congress and directly into your scientific research coffers.

You may say, “But, Barry, some of those aren’t even in the United States! Why are we talking about them?” I’m glad you asked. Because I was wondering the same thing and did some research.

The Associated Press happened to mention in their opening salvo against Trump: “Thousands of scientists worldwide left their labs to take to the streets Saturday along with students and research advocates in pushing back against what they say are mounting attacks on science.”

So, there’s your answer: “Scientists WORLDWIDE!” According to this, the March for Science (or for you Soros-minions, “A Day Without Scientists”) which coincided with Earth Day (because as we all know, Mother Earth [precious Gaia] loves and cherishes ALL scientists) wasn’t just about Trump. It was about the attack on science the world over!

This march was concocted by Rush Holt, a former physicist and Democratic congressman [shock, shock!] who runs the American Association for the Advancement of Science. Despite his assertions that this march is not partisan, he admits that the idea for it was dreamed up while he marched at the Women’s March on Washington. “It is not just about Donald Trump,” assures Holt, “but there is also no question that marchers are saying ‘when the shoe fits.’”

Yes, yes, of course. No partisan politics there at all! It’s just about science, you know.

Ultimately, this all comes down to what is ACTUALLY important to Americans. When I first read about this march, I wasn’t surprised that it was invisible on most major networks. Why? Because people don’t care what a bunch of Liberal hacks think about science.

Science used to be about legitimate, thought-provoking research into subject matters that actually impacted human life. They were grounded in hard, solid fact and they were not merely theories proposed with generalized statements accompanying them about how a “plurality of scientists agree” or how empirical evidence is not as important as consensus science (in other words, what WE say and agree on is more evidentiary than actual fact, even when that fact contradicts our consensus).

These marches and protests are an example of how stilted and retarded the learning curve of Washingtonians has become. They believe that their organizing in the streets is impactful on the minds of Americans, when in fact, the only people impacted by these idiotic displays are those in traffic on their way to work. These loud and foul-mouthed marchers believe that, because they see themselves on the television at night, their “message” has resonated with America. News flash: No one cares. Your “message” is nothing more than a cry for privilege or entitlement. When you’re whining about money and how much grants are being slashed, while my child is crying for food, your idiocy falls on deaf ears.

I have been in pursuit of science all my life, but politics has taught me that “science” is a snake-in-the-can these days. It is a blanket term for all things regarded as anti-religious and pro-Progressive. Science to the modern-day Liberal is all about marching, awareness, wearing ribbons, carrying signs with kitschy sayings, and funding grants (oh, and of course, burning down logging camps, blowing up pipelines and ramming military ships). When you think about science, you automatically think about white lab coats and beakers, but rarely do people imagine all the bean counters who are huddled over their financial paperwork, furiously attempting to squeeze out just the slightest bit more of blood from the stone (blood being dollars and the stone being the taxpayers).

When “science” is asking for grants for the research of cancer-seeking sniper blood cells that take out malignancies in the body, I’m all on board. When “science” is putting a hand out for funding of transgender pets and their straight owners research, I draw the line and take exception.

There is not enough money in the world to make me think that these ridiculous research hoaxes are worth more than finding a cure for studpidity.

Come up with a research model for curing the sickness called “Liberalism” and I will fund that myself!