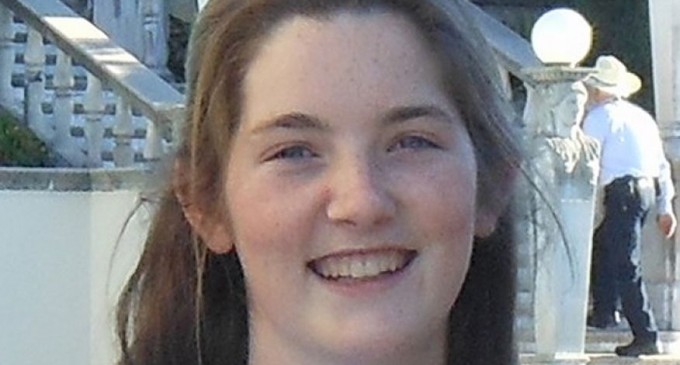 Meet 16-year-old Thrin Short, she's a ‘domestic terrorist', according to a petition circulating the campus at the University of California at Santa Barbara which supports a liberal professor who physically assaulted Ms. Short and stole her property.

Ms. Short was exercising her free speech in the designated ‘free speech zone' on campus with pro-life displays, much to the dismay of professor Mireille Miller-Young, who took her sign from her and assaulted her 3 times.

The professor taught such ‘diverse' courses on campus, such as “Black Women in Porn*graphy”

Last month Miller-Young was charged with misdemeanor counts of theft, battery and vandalism. She pleaded not guilty last week.

See our original post HERE for a video of the actual incident of abuse the professor inflicted upon Ms. Short.

Dueling petitions involving a pro-life teen and a professor charged with attacking her are circulating at the University of California at Santa Barbara, and the student body is backing the teacher.

Students at the University of California at Santa Barbara are circulating the petitions, one in support of feminism Prof. Mireille Miller-Young, and another backing Thrin Short, the 16-year-old pro-lifer whose March 4 demonstration was allegedly broken up by Miller-Young. The one backing the professor, who has been charged with battery and vandalism, has more than 2,000 signatures, while the one in support of Short has 150, according to The College Fix.

“They talk about prioritizing the safety of our campus involving activists, yet it’s our professor that attacks somebody.”- Katie Devlin, UCSB student

“The last thing we need are these people invading our community,” UCSB sophomore Katherine Wehler, a theater and feminist studies major, told the site.

She said pro-lifers with graphic images of aborted fetuses such as Short and her sister carried are like “domestic terrorists.”

However, another petition making its way around the student body calls for Miller-Young’s termination.

“This is about someone who violated the law in several ways, disregarded the idea of freedom of speech, and tarnished the image of the UCSB,” it reads, before emphasizing that it is not a petition in support of the pro-life movement, but one advocating freedom of speech.

“They talk about prioritizing the safety of our campus involving activists, yet it’s our professor that attacks somebody,” UCSB student Katie Devlin told The College Fix. “I think it’s just the contrast that she is a feminist professor and stands for protecting women, yet she attacks a young girl.”

Thrin told FoxNews.com that she and her older sister Joan, 21, were holding signs and demonstrating in a free speech zone on the UCSB campus with other pro-life activists when the feminist studies professor — who teaches one course on campus titled “Black Women in Pornography” — approached the group.

“Before she grabbed the sign, she was mocking me and talking over me in front of the students, saying that she was twice as old as me and had three degrees, so they should listen to her and not me,” Thrin Short wrote in an email to FoxNews.com earlier this month. “Then she started the chant with the students about ‘tear down the sign.’ When that died out, she grabbed the sign.”

The professor snatched the sign and then allegedly walked through two campus buildings as Short, her sister and two UCSB students followed her. Short said Miller-Young pushed her at least three times as she tried to stop the elevator door from closing and get back her sign.