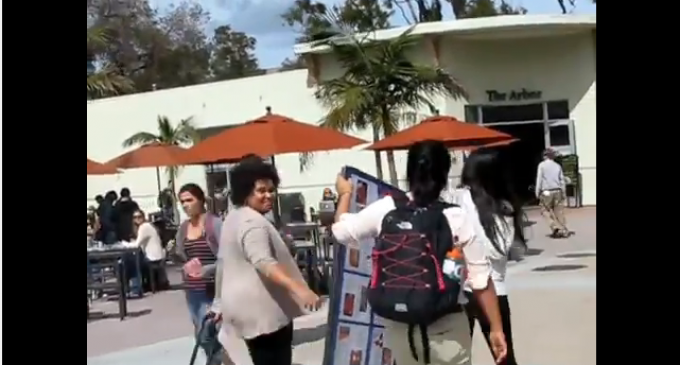 UC Santa Barbara professor Mireille Miller-Young, Ph.D, recently physically assaulted a member of a pro-life group named “Survivors of the Abortion Holocaust” while in the process of  stealing the group's pro-life sign, which they had displayed in the ‘free-speech zone' at the school.

Miller-Young states to the group on camera: “I might be a thief, but you're a terrorist.”

The professor stated of violent assault on a 16-year-old: “I’m stronger, so I was able to take the poster.”

Finally, during the commission of these crimes, she turns to the camera and says “Try and stop us.”

The district attorney in Santa Barbara, Calif. has formally filed charges against Miller-Young for vandalism, battery, and robbery.

Welcome to the new America, where liberals feel ok with violent actions to accomplish their socialist agendas, justifying their actions because conservatives exercising their rights are ‘terrorists'.