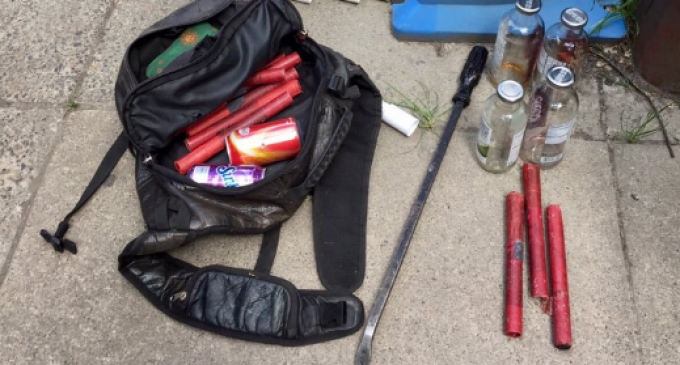 Patriot Prayer is a Trump supporter group that routinely goes out into public areas and carries Holy Bibles with them as they quote scripture and show support in a patriotic way for their president.  They are always armed with permits for such gatherings and travel about the upper northwest region in order to bring their message to the masses.

At the same time as these men and women go about attempting to spread the word of American greatness and standing together in firm commitment to a more stable economy, a more lawful judiciary system, and a more honest political class, Trump detractors follow them about in an effort to silence them.  These anti-First Amendment “protesters” are bought and paid for by the HOGS (Hillary, Obama and George Soros) funding corporation and routinely cause chaos, up to and including rioting, destruction of private and public property, destruction of public utilities, use of dangerous weapons and/or materials, obscene language, signage, clothing and paraphernalia, physical injurious behavior and anti-authoritarian action.

Welcome to the new Left, or the alt-Left as they have been referred to as of late.  These Millennials and Baby Boomers have joined forces to create one of the most destructive and anarchistic groups to walk the streets of America since the KKK stormed Washington, D.C. in the late 1920s.

Armed with ignorance, self-importance, empty rhetoric and few words of comprehension among them, these useful idiots, some paid up to $1K a week for their efforts, follow groups like Patriot Prayer around and taunt them with words and shoves.  These self-described anarchists are so cowardly that they actually dress all in black (in the daytime, no less) and wear hoods and masks so that their parents won't ground them or cut off their weekly allowance, and harass Trump support groups with threats of violence.

Just two weeks ago, Patriot Prayer was in a park not far from an anti-Trump rally when the latter pulled out a baseball bat, knife, and several other items in a threatening way.  One of the women in the group who looked like a professional wrestler, challenged the biggest of the men in Patriot Prayer.  It was a pretty hysterical display, especially when the group was encroached upon on the street and one of the anti-Trumpers put a hand on one of the Right wing group members only to find himself clocked clean in the face and scrambling down on the ground to move away from them.

This time around, Patriot Prayer was not prepared for the show of force that was determined to get its message across in a very big way…