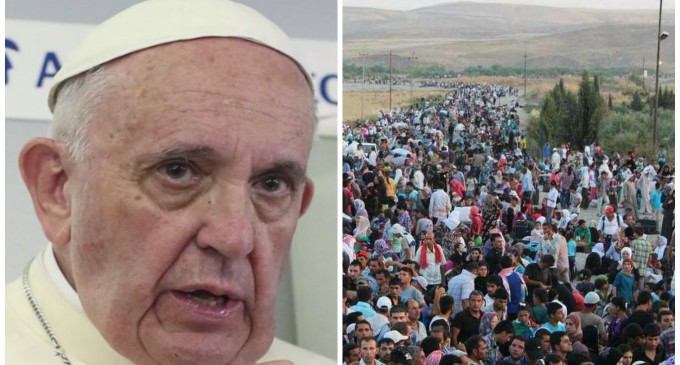 Pope Francis seems more and more out of touch with reality. He took time off from his global warming lectures recently to talk about the hordes of migrant Muslims flooding into Europe and the United States so that he could chastize countries that are becoming increasingly opposed to unvetted Islamic emigres who could potentially be Muslim terrorists, determined to bring down Western civilization. The more senior Catholic leadership is also becoming more and more concerned that Francis' liberation theology is overly leftist and pitting him against many countries of the free world.

More hypocritically, he suggests that Europe and the United States fling open their doors to more and more Muslim immigrants who have shown themselves to be lawless, demanding, and simply interested in a free hand out. Assaults and rapes have occurred in several European countries that have welcomed the migrants in, and it turns out that the hordes are predominantly young males of military age, not from Syria, and they are demanding that Sharia law be implemented. All the while, the Vatican is one of the most tightly controlled locations regarding immigration, and no known Syrian refugees have actually been invited in to reside in Pope Francis' homeland. Like all leftists, Pope Francis is willing to be quite generous when it is others who pay the price.