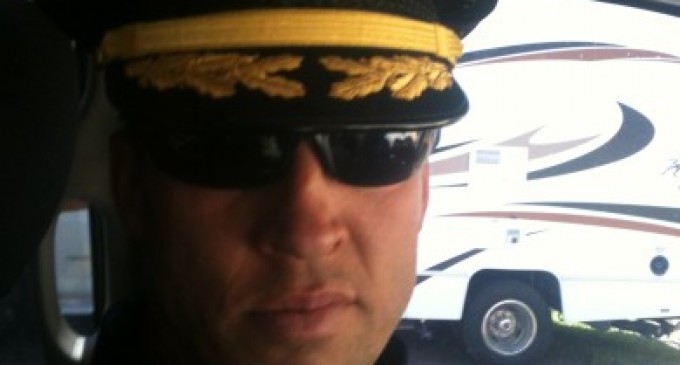 Police chief, Shane Harger, has been ordered to disband his entire police department due to his “political affiliations.”

What are his ‘political affiliations’? Chief Harger attended the ‘Constitutional Sheriffs and Peace Officers Association (CSPOA)’ in Las Vegas this week.

CSPOA is an organization under which law enforcement officers gather to re-affirm their commitment to uphold and defend the Constitution.

On his flight out to Vegas to the convention, Chief Harger was detained by TSA and a man who stated he was a ‘federal agent’, who informed Harger that he was a ‘person of interest’.

Harger was detained for 30 minutes before being released.

Upon his return, on Tuesday January 28, Harger was placed on administrative leave and ordered by Sandoval County, NM, Sheriff Douglas C. Wood to disband his entire police department.

Being a Constitutionalist is now grounds to get you fired from law enforcement.

Obama has already purged an unprecedented 200 top commanders from our military. Now we are witnessing the start of a purging of our police force.

Our country has truly been taken over!

A police chief was detained and harassed by federal agents while traveling to a constitutional convention before returning home to be told he was fired and ordered to disband his police department after signing a pledge to uphold the bill of rights.

Police Chief Shane Harger of the Jemez Springs, NM Police Department was flying out of Albuquerque Airport last week on his way to a Constitutional Sheriffs and Peace Officers Association (CSPOA) convention taking place in Las Vegas. CSPOA is an organization headed up by Sheriff Richard Mack under which law enforcement officers gather to re-affirm their commitment to uphold and defend the Constitution.

Before passing security, Harger was approached by a TSA agent who asked the police chief to show his credentials. Moments later, a man claiming to be a “federal agent” also asked to see Harger’s credentials before telling him he was a “person of interest.” The federal agent then demanded to know where Harger was traveling to and why.

When Harger told the federal agent he was attending the Constitutional Sheriffs and Peace Officers Association Convention in Las Vegas, he was detained for 35 minutes before finally being allowed to board the airplane.

On Tuesday January 28, a day after his return, Harger was placed on administrative leave and ordered by Sandoval County, NM, Sheriff Douglas C. Wood to disband his entire police department due to his “political affiliations”.

What were his political affiliations? While attending the convention, Harger, along with 38 other police officers, signed a declaration affirming their pledge to “obey and observe” the U.S. Constitution, in addition to refusing to carry out unconstitutional orders such as gun confiscation without constitutionally compliant warrants, violations of the 4th amendment without probable cause, detainment or incarceration of citizens without probable cause, or working with the military for domestic law enforcement.

In other words, Harger was targeted for federal harassment and subsequently fired for re-affirming his belief in the very Constitution he took an oath to uphold and protect in order to become a police officer in the first place.

“Despite having received a meritorious commendation from the Mayor of Jemez Springs on January 22, 2014, it seems that no one in the village government is willing to come to the assistance of Harger. It appears that Harger’s stance to defend and uphold the Constitution has put him and his entire department of ten part-time and volunteers out of business,” writes Vincent Finelli.

“I was at the convention and I never saw nor heard anyone say nor do anything that was a violation of any law. The CSPOA convention was an assembly of peace-loving Americans who just wanted to uphold their oath of office, that being to support and defend the US Constitution and Bill of Rights for all of us, We The People,” adds Finelli.

Harger’s treatment is yet another disturbing indication that the federal government, in addition to law enforcement authorities, view Americans who support the bill of rights as domestic extremists. Harger’s position as Chief of Police also shows that they are desperate to prevent citizens who identify as constitutionalists, tea partiers or libertarians from holding any position of influence within law enforcement or society in general.

Harger’s dismissal for his patriotic and constitutional “political affiliations” is a chilling reminder that such positions are not only not welcomed but actively discriminated against by the federal government.