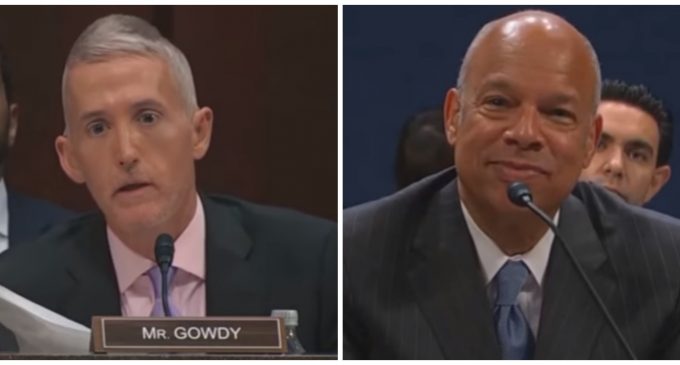 Trey Gowdy has been a Democrat-slayer for many years now.  His time as an Attorney General in South Carolina fully prepared him for the wiles of the Swamp and he has performed brilliantly.  I don't believe there is a man or woman in the entirety of the Congress who is willing or able to go toe-to-toe with this force of nature.

I have always respected this man and his ability to draw the truth (or at least shine a spotlight on the obfuscation of the truth) out of a person on the hot seat opposite him who is unwilling to give a straight answer.  I have watched him over the years destroy official after official after official simply based on his uncanny ability to lead them all into a trap of their own words.  If I were ever to give a piece of advice to anyone having to face this man, it would be this:  Either invoke your 5th Amendment rights or simply tell the truth.  Because there are no two ways about it, Gowdy will chew you up like a pitbull and spit you out.

Early on in 2016, there was a healthy respect for Gowdy by Donald Trump.  I can remember quite a few tweets by then-candidate Trump where he was considering Gowdy for Attorney General.  Personally, as much as I love Sessions, I believe Gowdy was the stronger candidate, although I understand that having Gowdy serving in Congress was just as much a help rather than a hindrance, especially when considering that the Democrats have gone full-in on this ridiculous concoction of the Russia collusion narrative.  Plus, if I recall correctly, there was a small dust-up between Gowdy and Trump later in the year that led to them not actually speaking any further about the DOJ position.

A couple of months ago, a story broke regarding the Clinton campaign having dreamt up the whole Russia collusion story within hours of losing the election.  Even Rush Limbaugh touts that on occasion when talking about the ludicrousness of the charges.  Although it was an attractive scenario to imagine that Hillary was so distraught at having lost an election that was promised and guaranteed to be her crowning achievement that she came up with this spur-of-the-moment cockamamie idea about Russia and their Trump connection, it never sat well with me.

Before long, a theory began to emerge regarding the Obama administration and its insistence that all states begin regarding or “designating” that their elections systems be considered as vital infrastructure under the umbrella of the federal government.  In other words, the feds would now run all elections systems in the U.S.  That did not sit well with states, both red and blue, which inadvertently set up a battle of wills: one that would pit the Secretary of the DHS against all the states.

Senator Trey Gowdy got the opportunity to begin grilling Jeh Johnson on, not only the DNC hack by “Russians,” but also why designations by states were necessary if the DHS was not going to be demanding the evidence of the server to be handed over for review and investigation.  Read more on the following page and watch as Senator Gowdy makes a fool of the man who thought he was too clever for the Pitbull of Congress.