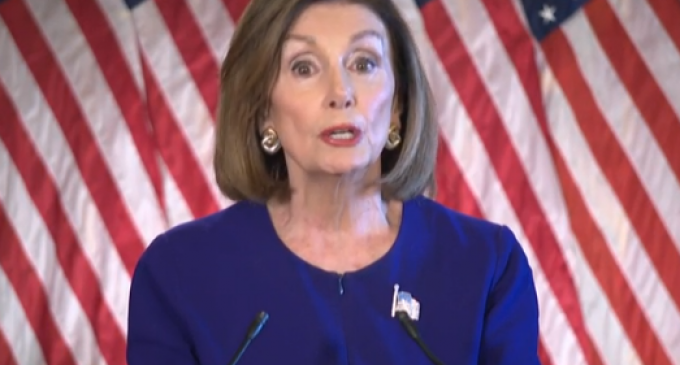 Speaker of the House “Nervous” Nancy Pelosi has come forward to announce that on Thursday, October 31st, representatives will vote on formal rules for the impeachment proceedings. Although it is not an actual vote on Articles of Impeachment, she has stated that this vote will make it clear to the White House and Republicans how serious the Dems are about proving the many high crimes and misdemeanors of this president.

As the Democrat impeachment machine grinds on, the horizon unseen and their accusations everything but clear, Donald Trump forced the hands of the very docile Republicans in the House of Representatives to finally come aboard the ship and right the course of Congress. The GOP finally found its voice this week after more than thirty of the representatives (called a KKK mob by MSNBC) stormed the closed-door proceedings by Schiff’s Intelligence Committee, causing a five-hour delay.

Those familiar with the proceedings have insisted that the process is anything but fair and, in fact, reeks of Chicago-style thuggery not unlike that of the Obama-era tactics taken by then-House Speaker Nancy Pelosi and Senate Majority Leader Harry Reid to jam Obamacare through Congress without a single Republican vote.

This has not stopped the Democrats from proceeding through this impeachment “inquiry” with the least transparency and the highest frequency of leaks seen from the federal government since the days of James Comey, John Brennan, and James Clapper. Even Hillary Clinton could not have orchestrated such a burst pipe as this.

Turn to the next page to read more about this vote and how it does nothing to alter the fact that she apparently continues to lack the votes to move forward with official impeachment proceedings!