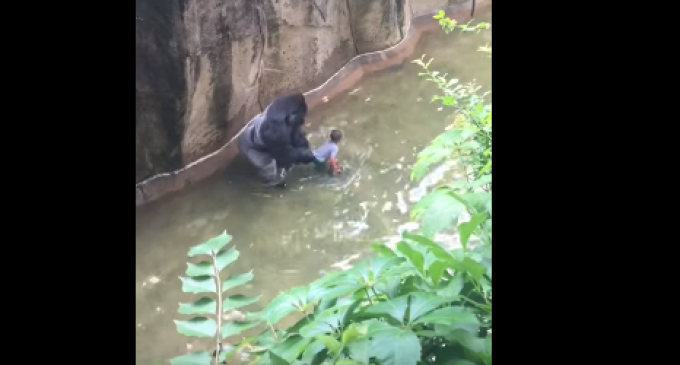 Harambe is dead. Harambe was a 17 year old gorilla at the Cincinnati zoo that was shot and killed this weekend during an unfortunate accident. His death now has crazed internet animal rights and Black Lives Matter fanatics screaming, but for different reasons.

A four year old child named Isaiah somehow escaped the care of his parents and climbed in between the bars of the gorilla cage. Harambe grabbed the child and carried him away to another part of the gorilla pen, no doubt startled by the screams and shouts of zoo visitors watching the scene.

A rapid response team immediately went to the aid of the little boy and felt that the most expedient action was to shoot and kill the gorilla before it could do any more damage to Isaiah. Of course animal rights activists, who feel that all animal lives are equivalent to a humans, whether it is a kangaroo or a kangaroo rat, immediately condemned the response team for saving the boy in the most expeditious way possible.

It seems that these animal rights people just knew that Harambe was harmless, and so they insisted the response team was evil and depraved (and worse) for killing the gorilla in order to save the child. While this is idiotic, there is another group that is even more ridiculous in their claims.

See page 2 for another group that is angry about the “murder” of Haramabe.