Jade Helm As Preparation For Or Instigation Of Martial Law 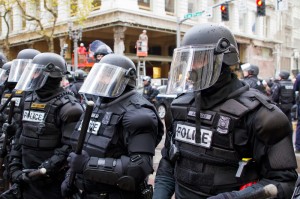 Running from July 15 through Sept. 15, Operation Jade Helm and will involve 1,200 special forces taking part in Special Operations exercises across 10 states ranging from nighttime air drops into small towns to'infiltrating' the civilian population in what is called ‘realistic military training'.

There are several reasons many speculate that this is either a preparation for martial law or actual false flag to instigate it, some include:

– The massive size of the event
– The unprecedented nature of the event
– The labeling of Texas and Utah as ‘hostile'
– The controversial nature of the unconventional warfare exercises to be conducted, such as infiltration of the populace
– The recent sharp increase of off-base military exercises across the country
– In the past, military drills have often very closely mimicked and occur close to or actually coincide an actual hostile event. 9/11, the London 7/7 and Boston bombings serve as examples:

During the 9/11 terror attacks in lower Manhattan, one of the most coincidental drills in history, being run by Vice President Dick Cheney, ended up causing mass confusion for the military’s air traffic radar system, when the very scenario being exercised went live.

Operations Vigilant Warrior, Vigilant Guardian and others were amazingly envisioning hijacked planes that were targeting high-profile buildings and landmarks.

The drill’s artificially installed radar blips sent vital resources like military aircraft away from the hijacked planes and confused both public and military air traffic control, rendering those systems temporarily useless, at the most inopportune time of the attacks.

FEMA was also coincidentally on hand for the attacks, as they too had the presence of mind to set up shop in Lower Manhattan the day before 9/11, in preparation for their own drill that was scheduled for the following morning. Needless to say, that drill was cancelled as well.

The remarkable coincidence allowed police, bomb-squad and emergency personnel to simply switch over from drill mode to live on the exact same bus and train stations, at the exact same time the attacks of 7/7 occurred.

Peter Power, Managing Director for Visor Consultants, involved in running the drill for the anonymous contractor, was quoted on the day of the attacks saying, “We based our scenario on the simultaneous attacks on the mainline and underground station. So we had to suddenly switch our exercise from fictional, to real.”

MOVE ON TO PAGE 3 – Preparations For Russia Retaliation: