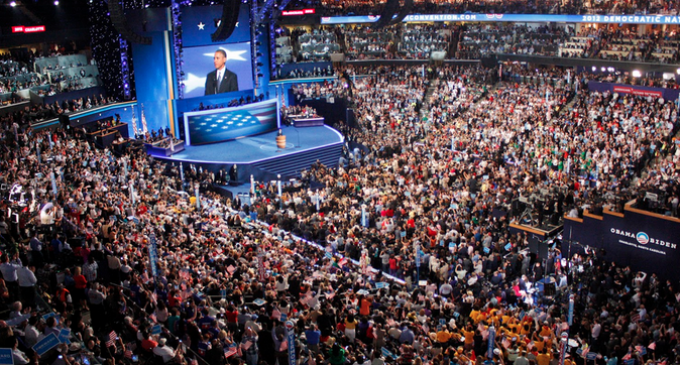 Old Glory is nowhere to be found at the Democratic National Convention. There are no flags on the stage, nor was Bill Clinton wearing the emblematic American flag pin that so many before him have donned.  Patriotism seems to be in a coma at the DNC and no one seems to care.

Filmmaker and best-selling author, Dinesh D'Souza has been in attendance at the convention, giving his “followers an inside look” the convention. His most recent movie, “Hillary’s America: The Secret History of the Democratic Party”, to date has grossed $5,208,556 and the film delves into the “Democrat's transition from pro-slavery to pro-enslavement” to Hillary's personal profit from while stealing America.

D'Souza tweeted a selfie in front of the teleprompter while at the DNC, pointing out that those present need the words to the pledge of allegiance.  Exactly what flag they intend to pledge to, is yet to be seen on the convention floor.

The rest of the story can be found on page 2.