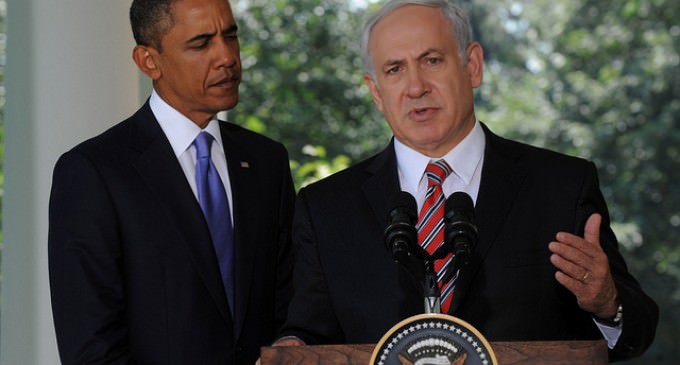 With the obvious upset Obama feels at Netanyahu’s re-election, despite Obama’s subversive efforts to the contrary, the President may chose to not veto future anti-Israel resolutions by the United Nations Security Council, as suggested this week by White House spokesman Josh Earnest.

“What he’s pointing to is a [diplomatic] campaign underway… where the Palestinians have been going to the United Nations to declare a state unilaterally,” said Jonathan Schanzer, vice president for research.

So far, “the United States has shot it down,” Schanzer said.

The United States has chosen to block U.N. involvement in the Arab vs. Israel fight because it prefers the Israeli government and local Arab leaders negotiate a peace deal that creates two independent states, Earnest said at the midday press conference.

But, he said, “what has now changed… [is that Israeli Prime Minister Bibi Netanyahu] has indicated that they’re not committed to that approach any more.”

“If that’s the case, it means we need to rethink what our approach is going to be,” Earnest said.

If Obama refuses to use the U.S. veto, the security council could declare the Arab territories alongside Israel to be an independent state, complete with an army.

But “the Palestinians are not prepared [and soon] would be at war with Israel,” Schanzer predicted. A new Arab state “would be a recipe for conflict, for just a whole chain of events,” he said, partly because the Palestinian Arabs are already divided into two rival armed groups.

“I don’t know what [Obama] is doing… it is incredibly difficult for me to understand what the strategy is,” Schanzer said. “Part of it is personal [but it also] appears to be an attempt to punish the Israeli public for putting Netanyahu back into power again,” said Schanzer.

But Obama’s pressure on Netanyahu also serves to weaken Netanyahu’s strong public objections to Obama’s pending strategic deal with Iran. That deal would leave Iran’s Israel-hating Islamic theocracy with the funding, ability and legal right to build a large force of nuclear weapons by as early as 2025.