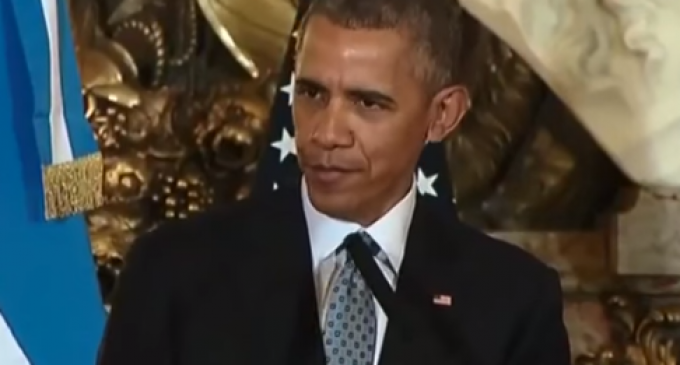 President Obama's attempts to deflect blame for the wave of jihadist terror enveloping the globe are not working, and even he is starting to realize it.

Eager reporters have trailed Obama from Cuba to Argentina in order to ask him about the barbaric attacks that shook Brussels earlier this week. Almost as if he was just going through the motions, the President made a brief statement and gave inconclusive answers about the bombings to reporters in Havana, apparently thinking that settled the matter.

But this was not enough for journalists, who continued to hound Obama for a more definitive answer as to the question of Brussels and the wider threat it represents. Clearly annoyed by the persistence of the press, Obama prefaced his newest statement with a smart-aleck remark.

“I addressed this issue a little bit at the baseball game when I was interviewed by ESPN,” he said, as if the reporters were being disrespectful or even stupid for pursuing the matter. But it was what he said next that made many smack their foreheads in exasperation.

See what Obama said about ISIS on the next page:

It might be hard to imagine, but the president simply doesn't believe that ISIS is an existential threat to the US. How do we know this? Because he straight-out said so. No wonder he didn't seem bothered at all when ESPN asked him about the bombings at the Havana baseball game:

“Their primary power — in addition to killing innocent lives — is to strike fear in our societies,” he added. “It is very important for us to not respond with fear.”

Earlier in the press conference, Obama showed displeasure when an Associated Press reporter asked whether the Brussels attacks “changed anything.”

“I’ve got a lot of things on my plate,” he responded before assuring reporters his top priority is “to eliminate the scourge of this barbaric terrorism that’s been taking place around the world.”

ISIS is, yet again, a JV team: