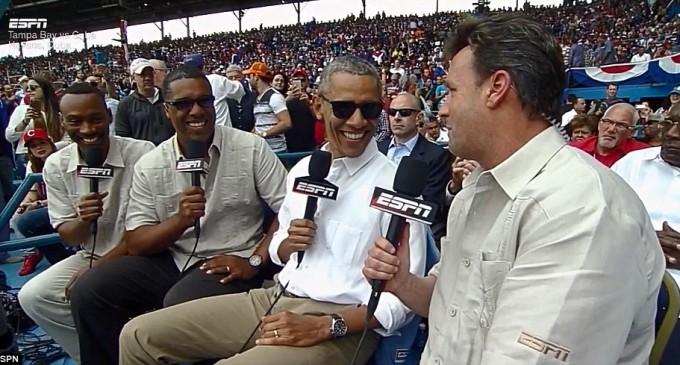 Showing complete disregard for both decorum and reality, President Obama persists in his belief that terrorism is not a major threat even after the deadly attacks in Brussels.

Speaking to reporters at a baseball game in Havana, Cuba, Obama spouted the usual platitudes about uniting to stop terror but neglected to offer any serious solutions to the issue. You would think he would be a bit more sensitive to the issue after dismissing ISIS as “the JV team” shortly before the group started rampaging across Iraq and Syria, but apparently he learned nothing from the issue.

Refusing to so much as raise the casual-style sunglasses obscuring his eyes, Obama appeared a little defensive as the reporters questioned him over his refusal to return home to plan a counterattack.

Obama argued that altering his schedule would play into the terrorists' hands by showing they could “disrupt” things, i.e. his schedule chockful of such self-aggrandizing activities as enjoying baseball in the capital of an authoritarian state.

In other words, it's best to just ignore the attacks.

Watch Obama speak about the attacks on the next page: