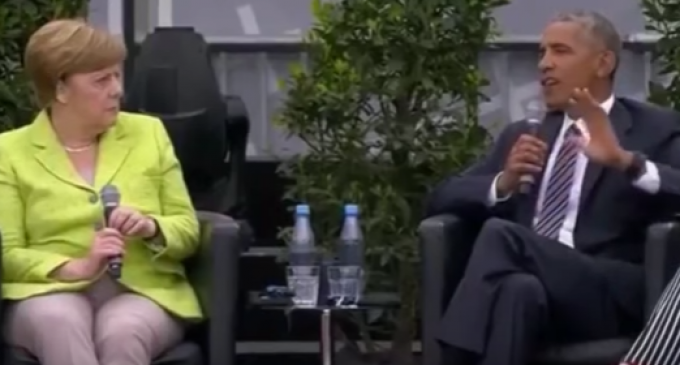 As predicted, citizen Obama has traveled to Germany to visit with his other half of the Global Twins, Chancellor Angela Merkel, comrades in spirit and deed.  Finally, with “permission” to speak at the Brandenburg Gate, he was able to check that off his bucket list, a thing he really wished had occurred during his presidency, but oh well.  You take what you can get, right?

With an opportunity to air all his opinions without the nuisance of an American audience that might heckle him or interrupt his teleprompter train of thought (really not sure if he had one, but funny all the same to think about it…like did his staff have to upgrade it from 110 to 220?).  The audience appeared to number in the 500 to 700 range, but I'm sure in his mind it was more like three to four million.  Really doesn't matter anymore, as everyone knows that a European's opinion is worth three times what an American opinion is worth anyway.

The subject matter of the speech was lofty and riddled with platitudes, overarching voluminous terminology, insightful profundities too blindingly deep to be understood by mere mortal men, and of course a dirty-laundry list of how many failures have allowed American interference to force other nations into poverty, joblessness and homelessness.

For instance, the way global warming is understood by good and faithful Liberals is a drop in the universal bucket of damage that is thrust upon other nations, when we stop to assess the amount of culpability that we bear in America as a nation that is bloated, slow, stupid and faith-driven in its laws.  Match that against how the bloated, slow, stupid and faith-driven Conservative Christians fail to grasp how impending our doom is on this planet and you've got a denial recipe for global disaster.

Following the pleasantries of bashing America and reminding the world of how much more virtuous are the nations of the rest of the world, Obama jumped right in to the REAL reason for his “official” trip to Germany.  Yes, I did say, “official.”  I know what you're saying (or shouting at your screen):  “How is it ‘official' when he's not even in office?”

Well, my dear readers and fellow climate deniers (because “climate DOES change, dammit!“), it's “official” because Obama and the media said so.  Case closed.  Conversation over.  Obama radioed in ahead and told Merkel that he would be there to coincide with Trump's visit to Europe in an effort to blunt the President's anticipated momentum abroad.  How did he know what Trump's schedule would be?  C'mon, are we really gonna rehash that?

So, there he is, chiding America to all his adoring Socialist friends and neighbors in Germany, an obvious stocked crowd of VIPs shipped in directly from all corners of Washington, D.C., no doubt, when he drops the bomb that he's been just itching to drop.