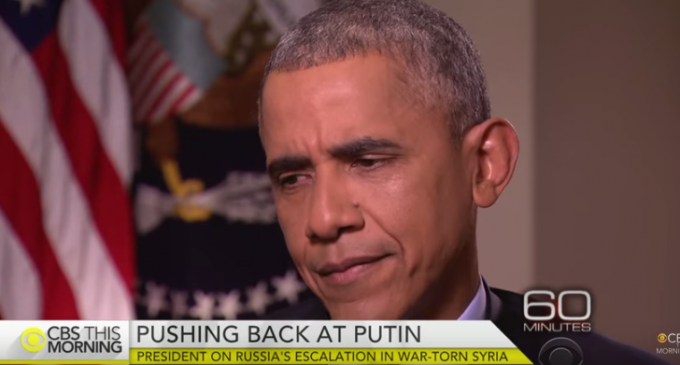 Obama who is accustomed to being handled with kid gloves, was surprised and then became visibly aggravated at the 60 Minute's Steve Kroft, who asked the hard questions-pointing out Obama's lack of any plan for Syria.

Kroft led by bringing to Obama's attention Russia and Putin, laying out the obvious vacuum Obama created in the Middle East, which Putin has turned to his advantage.

Obama incensed, tried to counter punch the statements, however the facts were too difficult to spin, and Obama was left looking inept.  Throughout the whole confrontation, Obama seemed on the edge of “losing it”.   His facial expressions alone made one think he was ready to slap Kroft.

Obama's thoughts at the time must have been disbelief that one considered in the “main stream media” would dare ask real journalistic questions, and point out his failings.  The topic of the Middle East and Syria is important.  America's domestic situation has faled under Obama, yet the Middle East will not be something a new President may easily swoosh in and fix.