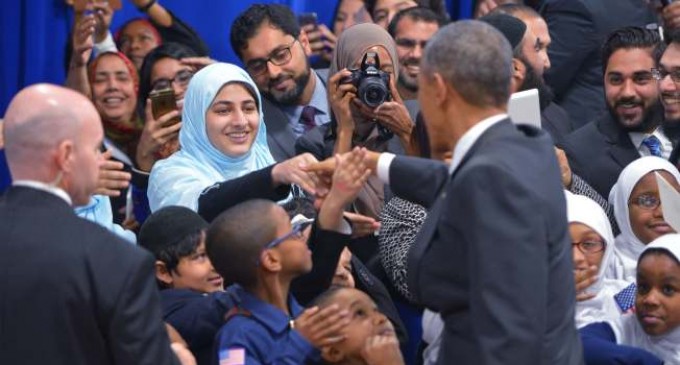 “Around the world there is a tradition of oppressing women and treating them differently and not giving them the same opportunities, and husbands beating their wives, and children not being sent to school. Those are traditions. Treating women and girls as second-class citizens. Those are bad traditions. They need change.”

But he didn't mean that to apply to the mosques he visits.

The President was visiting the Islamic Society of Baltimore and he gave his usual euphemistic lecture to America about not hating Muslims and that Islam is not all that bad.

However, on this day, he did not mention women's rights at all. When President Obama is in a mosque, he obeys the mosque.

President Obama did not deliver a speech on equal rights for gays or push for gay marriage in the mosque because that would be too un-mosquelike.

The leader of the Islamic Society of Baltimore is virulently anti-homosexual. Imam Yaseen Shaikh does not believe in gay marriage much less homosexuality itself.

“If somebody is committing an immoral act, a disgusting act, a despised act… in their privacy… we can’t judge them because we don’t know about it.” But, he said, “when that act is brought out into the public space, that’s when we have a problem.”

Muslims should  teach their children that it is “not okay” to be homosexual, Imam Shaikh said. “If our children are taught in schools and colleges that it’s okay … that this is an alternative lifestyle … We have to be teaching them it’s not okay.”

President Obama forgets that part of Islam every time he visits a mosque and lectures us on intolerance.

He isn't any better at defending women's right inside these places where an anti-western culture thrives.