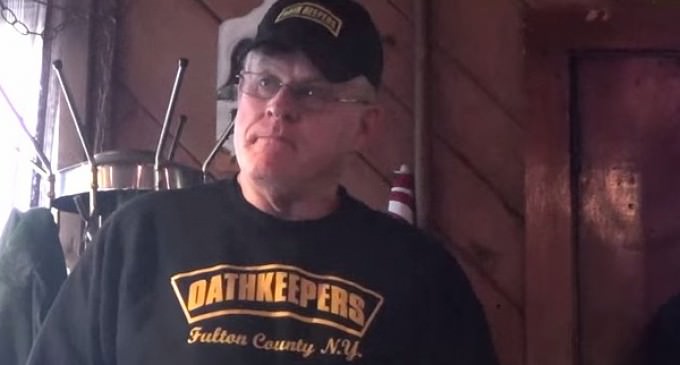 Add Sheriff Thomas Lorey of Fulton County, NY to the growing list of patriotic sheriffs who are defying the rash of recent gun control laws.

Sheriff Lorey is suggesting to residents in his county to throw ‘invitations' mailed by the state to register guns their guns as part of an early pilot program.

New York adopted the sweeping SAFE Act legislation in 2013 with most of the attention focused on a ban on “assault rifles” and high-capacity magazines. But a little-known provision of the bill requires every handgun owner to recertify their permit with the local sheriff or clerk’s office by 2018. The counties are then required to upload the permit information to a statewide digital database that is being created. The process must be repeated every five years.

The state has sent out 500 “invitations” to gun owners in several counties asking them to participate in an early pilot program. They are asked to go online and upload their information on each gun they own.

Sheriff Thomas Lorey of Fulton County volunteered his county to participate in the pilot program, only so he could send a message to the bureaucrats in the state Capitol, including Gov. Andrew Cuomo.

“I’m asking everyone that gets those invitations to throw them in the garbage because that is where they belong,” Lorey said at a recent meeting with conservative activists. “They go in the garbage because, for 100 years or more, ever since the inception of pistol permits, nobody has ever been required to renew them.”

The state wants to roll out the new online registration database by February, Lorey said.

Watch video clip of Sheriff Lorey explaining his position below:

In the meantime, Lorey added, “I want to assure you that everyone in Fulton County has nothing to fear from the sheriff’s office. We’ve got real crime and real criminals to occupy our time with.”

The NY SAFE Act stands for New York Secure Ammunition and Firearms Enforcement Act, which was passed in January 2013 and signed into law by Gov. Andrew Cuomo in response to the mass shooting at Sandy Hook Elementary School in Newtown, Conn. Similar legislation also passed the legislatures in Maryland, Colorado and Connecticut in the wake of the December 2012 tragedy.

In Connecticut, thousands of gun owners have refused to comply with the sweeping new gun control laws.

“The revolt is underway,” Gun Owners of America leader Larry Pratt told WND in a previous story about Connecticut’s refusnik gun owners. “Tens of thousands of people in Connecticut have intentionally missed the deadline. They are not registering. Some of them actually said they would not when they were at the hearing when the law was being considered in the legislature,” said Gun Owners of America Executive Director Larry Pratt.

Lorey seems to be leading a similar revolt in New York.

The Times Union of Albany reported last year that getting all of the counties up to speed with the new online database has been a chore, resulting in many delays.

State officials haven’t told the clerks why the pilot program has slowed. But most believe it has to do with difficulties in creating a new handgun database, the Times Union reported.

“They didn’t anticipate the amount of time it was going to take to establish that digital database,” Cortland County Clerk Elizabeth Larkin told the newspaper.

Alan Gottlieb, president of the Second Amendment Foundation, told WND that he wishes more sheriffs would stand up to unconstitutional legislation in their states.

“Sheriff Lorry is a patriot,” Gottlieb said. “His stand in defense of the Second Amendment is an example for all law enforcement.”

Lorey is a member of Oathkeepers, an organization of military personnel and police officers who vow to refuse unconstitutional orders, according to Reason magazine.

And Lorey isn’t alone in his views, Reason reported. The New York State Sheriffs Association and individual sheriffs are already on record opposing tightened gun laws and are suing the governor to block their enforcement.

Among the improvements, said a State Police spokeswoman, are features that would allow large numbers of firearms to be submitted and helpful pop-ups on the website that will be used.

Still, the challenges of creating vast statewide databases have become apparent with other components of the NY SAFE Act, according to the Times Union report.

A system allowing background checks for all ammunition sales was originally supposed to be in place by Jan. 15, 2014, but its rollout was postponed amid reports the database isn’t ready.

The county clerks were told in the spring-summer of 2014 that the pace of work on the beefed up handgun registry would pick up at the end of 2014 and into 2015 — strategically delayed until after the November elections.

Lorey said New York’s gun permit law was never meant to be restrictive in nature. He said the new rules can be applied in an arbitrary manner and are open to abuse. It will also likely be used as a revenue producer for the state, he said, as one county is already charging $15 for the “recertification.”

“The judges of the state of New York have gotten together and thought this up on their own,” he said. “It’s just a little device that helps them revoke your permit if they should suddenly get mad at you.”

As for the renewal fee, Lorey said, “The state of New York now wants to charge you for a renewal permit, for a right you already have.”