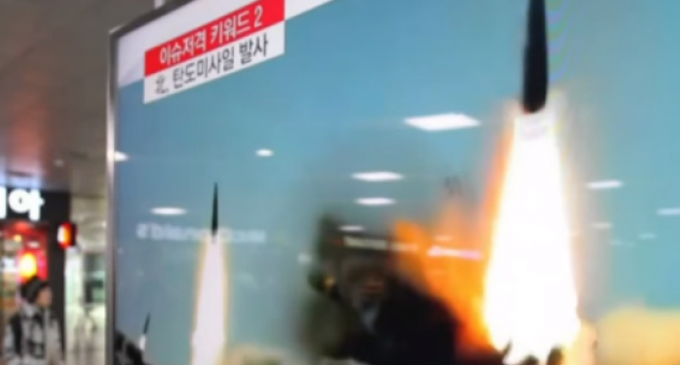 North Korea has fired two medium range Rodong missiles from the Sukchon area, a western part of the country.  The ballistic missile flew approximately 800 miles before plummeting into the Sea of Japan.

The U.S., in a attempt to punish Pyongyang for its nuclear and ballistic missile tests, have slapped North Korea with new sanctions.  The sanctions which block transportation, mining, energy and financial services deals with Pyongyang, seem to have only had the effect of Kim Il-sung thumbing his nose at the U.S. and enticing him to continue testing their military hardware.

The North Korean leader regularly threatens to destroy South Korea and Japan, as well as the U.S. He would be smacked down like a pesky mosquito except for his patron-saint China, so mostly the world just ignores his temper tantrums. The latest one resulted from his reaction to South Korea and the U.S. holding joint war games on the Korean peninsula, reports Truth and Action.

North Korea has claimed it could “burn Manhattan down to ashes” by firing a hydrogen bomb into the heart of the city on an intercontinental ballistic missile.

The statement, which was made via the state-run outlet DPRK Today, claimed that North Korea’s hydrogen bomb was more powerful than technology developed by the former Soviet Union.

The increasingly strong rhetoric emerging from Pyongyang appears to reflect the leader’s anger at the international community’s tough new sanctions recently imposed in response to recent nuclear and missile tests.

Read what spineless John Kerry has to say about North Korea's behavior on the following page.