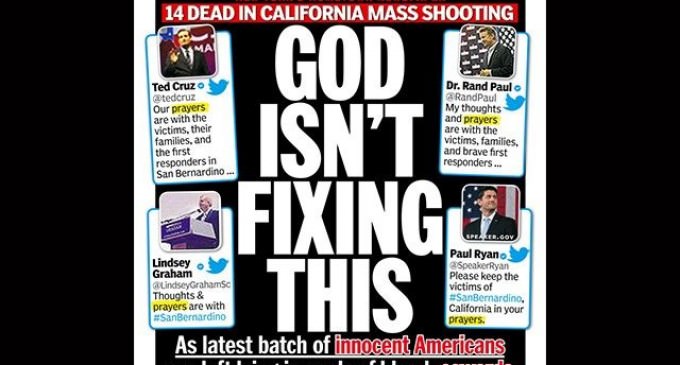 The New York Daily News may not want to believe in God, but they certainly think politicians can play god by legislating gun control.  In the myopic world in which liberals live, where government is god, they believe that somehow, legislating control of all things will create their version of heaven on earth.

This scream for gun-control, instead of true empathy with the victims is telling. It is the liberal's scream for more power and not a deep concern for those whose lives were eternally altered.

An understanding that the only thing that will bring any semblance of healing must come from a God, a Being greater than humanity, is where the those offering prayer over politics have it right.  So when grief stricken people pray for the victims, it is from a position of a depth of reality, that only God can bring healing a peace.  The victims need something and Someone greater than all the security any government can contrive and right now, the left-wing idiots need to lay down the rhetorical weapons and honor the families whose days will never been the same.

More on the New York Daily news on page two.