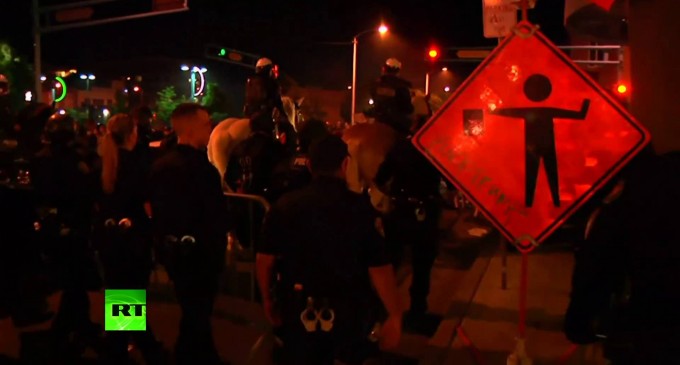 Albuquerque has become the latest battleground in the election's increasingly hostile climate as anti-Trump protestors sought to demonstrate against the presumptive GOP nominee.

Set just days before the New Mexico state primary, a Trump rally found itself the target of angry mobs who stormed the convention center and attempted to interrupt the candidate with boos and jeers. Knowing that these agitators were there to cause trouble rather than learn anything, Trump asked security to remove them, much to the relief of his supporters.

The scene outside the center, however, was no less chaotic. Many protestors marched in the street and angrily chanted “Dump Trump”, blocking traffic and pedestrians' way. Not content to simply inconvenience bystanders, however, the demonstrators started burning t-shirts and throwing them as well as rocks and other projectiles at police officers, with some even literally running over police vehicles.

It's a miracle no one was seriously hurt, and a testament to the ability of law enforcement to keep a lid on this volatile situation.