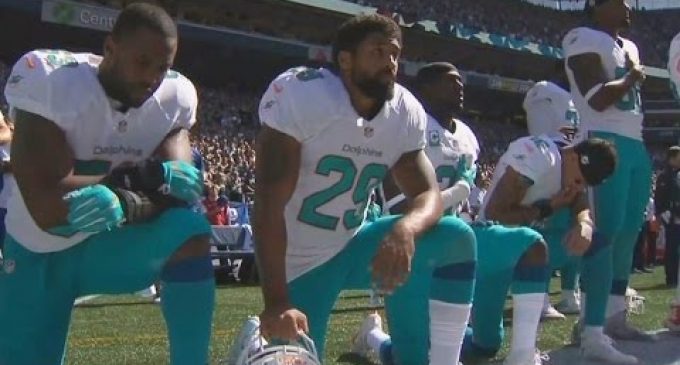 President Donald Trump has tweeted in the past wonderful little comments that question the wisdom giving something to someone in the form of aid, when that country disrespects us or shouts out, “Death to America!”  For Leftists, this is a cry for help when a country like Iran threatens us after Barack Hussein Obama pays a ransom to them of billions and billions of dollars.  We Right wingers know and the Iranian government knows that those billions are just going to go to terrorism and nuclear ambitions, but the Lefties…not so much.

The Left believes to a fault that evil pieces of human refuse need to have the benefit of the doubt, while denying that anyone on the Right who says they're not racists are called liars.  That's how the Left operates day in and day out, and they apply that way of thinking to virtually every argument.

Donald Trump has gone so far this week as to claim that the NFL being so disrespectful to the National Anthem and our flag by virtue of remaining silent on the subject of its players kneeling and being complicit through its silence warrants the US government looking into the many tax benefits that the NFL enjoys as nearly no other sport enjoys.

Read on the next page about how the Left is equating Trump's threat of changing the tax laws to a Mafioso godfather granting an offer they can't refuse!