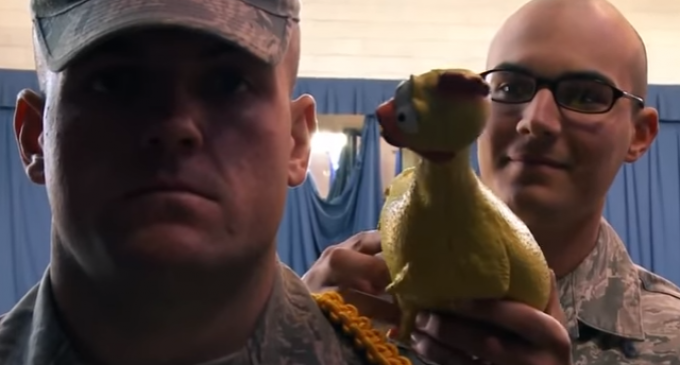 When I was in the military so many years ago, there were lots of different things that we were supposed to do while in formation in order to remain at 100% attention or parade rest.  One of those things was we were supposed to have eyes straight ahead.  You could blink, but you weren’t supposed to be looking around you.  Also, you were supposed to be expressionless.  Those that smiled were relentlessly picked on by the Drill Sergeants.

Your posture was ridiculed or corrected; very rarely you were complimented for your stance or your uniform, or the shine on your boots.  More often than not, it was a silent affair.  Everyone was quiet, unless asked a direct question and you had no choice but to shout your answer, “Drill Sergeant, yes!”

Normally, it was “Yes, Drill Sergeant!” but in Fort Sill, Oklahoma, Charlie Company, 1st Brigade, the Drill Sergeants there were a bunch of what we used to call, “hard-asses,” meaning they didn’t take any guff.  And so, we were trained to say, “Drill Sergeant” before any answer.  It was weird and awkward, but by the end of our eight weeks, we had it down to a routine.  Once we graduated, it was off to the Advanced Individual Training (AIT) over in sunny South Carolina…Fort Jackson!  Oh, how I really loved running up and down Tank Hill!

Anyway, that was about the extent of it, as far as formation was concerned.  We dropped and did push-ups for just about any minor infraction and by the end of my endless weeks of training, I could do a million without breaking a sweat.

What I’ve learned recently, though, is that there is a brand new form of test that really strains the limits of a soldier’s ability.  The so-called Chicken Test is being used in police academies and on military bases all over the country.  It’s a simple test, but the implications could scar a person for life!

Turn to the next page to read about this hideously evil new practice by our nation’s military and police trainers!