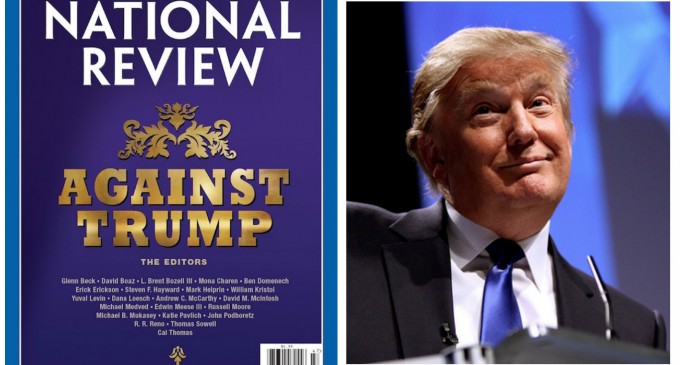 The cover reads, “Against Trump” and lays out the opinions of 22 prominent conservative contributors who believe Trump is a “a menace to American conservatism who would take the work of generations and trample it underfoot in behalf of a populism as heedless and crude as the Donald himself.”

In a lead in editorial, the publications warns that, “Trump is a philosophically unmoored political opportunist who would trash the broad conservative ideological consensus within the GOP in favor of a free-floating populism with strong-man overtones.”

Due to the strong elements in this publication, publisher Jack Fowler reports that they have been “disinvited” from co-hosting the GOP debate on February 25th. This was expected, according to Fowler, saying it was a, “Small price to pay for speaking the truth about The Donald.”

But, then Fowler gets wind of the cancellations coming down the pike and his tune sharply changes…check it out on the next page: