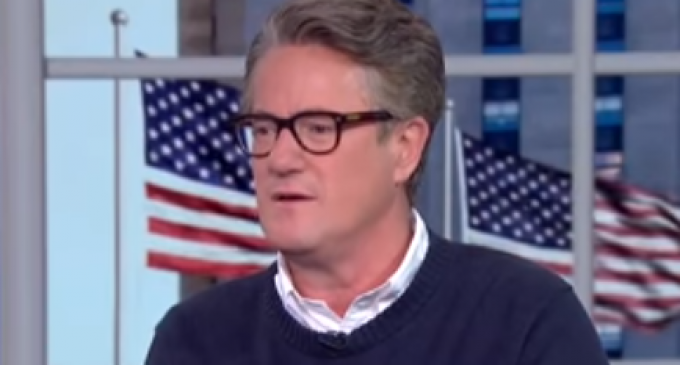 They say that you can't mix romance and politics, that eventually, the twain shall never meet.  Take Democrat strategist James Carville and Libertarian strategist Mary Matalin.  Many questioned the sanity of Matalin, being married to a complete madman like Carville, whose epic rants about Bush and now Trump measure on the insanity scale at Bellevue.  Attempting to remain in a marriage where the two components are so completely at odds seems an impossibility; and indeed it might be.  They say that opposites attract.  No one has ever said that opposites marry.   I guess there are exceptions to every rule.

In the case of Joe Scarborough of “Morning Joe,” he has since dropped his former life and apparently dropped to the knee for co-host, Mika Brzezinski, an announcement that they were engaged this year.  That may explain a lot of things lately that appear to be a little out of whack with the former Republican Florida Representative.  He has made a political career out of toeing the Republican Establishment line, but his hijinks on the MSNBC show “Morning Joe,” are beginning to sound a lot like the NPR program, “Left, Right and Center,” where all the guests on the show, as well as the hosts, are either uber-Leftists or Establishmentariat RINOs.

If Scarborough is beginning to sound like he's lost his Republican roots in exchange for some bleach-blonde Liberalism, it would make complete sense that his new fiancée may have a little to do with that.  With flagging ratings and a terribly competitive spot on cable, “Morning Joe” gets more soundbite airplay from Conservative networks than it does from the Leftist-run mainstream simply because there is big interest on the Right for Progressive buffoonery and Liberal lunacy.  No one can argue that you get both of these whenever you tune in to MSNBC.  And all bets are off if you're looking for any sort of cohesive debate on the Trump administration whenever Mika opens her mouth.  It's almost as if she believes that the majority of the American people are listening to her AND agree with her.

The flailing frenzy for another possible daily scandal has again reached an end-of-week crescendo as “Morning Joe” wrestles with the profound question of whether or not Trump is courting the Russians.  In a video snippet editorial, Scarborough himself appears confused as to Trump's NATO remarks, chiding the other governments for not forking over their fair share of support for the North Atlantic Treaty Organization.  His words are somewhat milquetoast, but silly all the same.