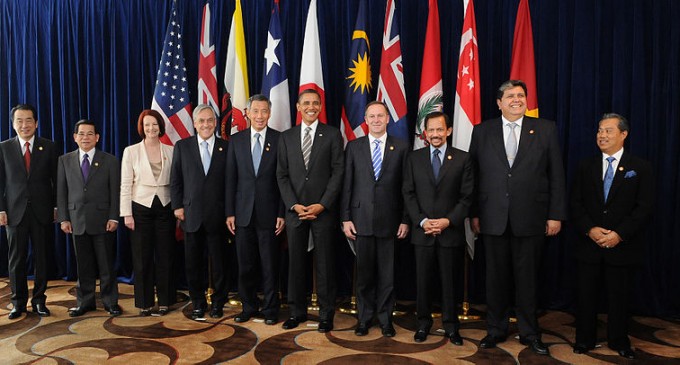 Concerns have been raised about private influence on the secretive TPP (Trans Pacific Partnership) negotiations. Although TPP meetings have been cloaked from the citizens of the nations participating in the pact, global multi-nationals Monsanto and Walmart are contributing to the deal. The TPP aims to arrange international trade tariffs and laws among 12 countries around the Pacific ocean, including the United States. The far-reaching effects of the deal may cause fundamental changes in Intellectual Property rights laws, for example, yet U.S. Congressmen and Senators are not welcome to participate in the discussion or even to review it.

It’s the secrecy that most loudly condemns the TPP and the coalition of corporate and government negotiators that travel the world meeting behind closed doors. As one commentator recently noted, “Not only is public input not welcome, but even the pretence [sic] of public participation has been lifted. Despite the lack of transparency, some documents have been leaked, and the ‘omissions' revealed speak loudly to the conspiratorial nature of the ‘partnership.'”

Equally significant is that 600 industry lobbyists and “advisors,” as well as unelected trade representatives, are at the table, while representatives from the public at large and businesses other than huge monopolies, are conspicuously absent.

If the trade deal is to be beneficial, surely some level of public transparency will be a good thing. Even the appearance of a back-room deal will mark the agreement for public suspicion.