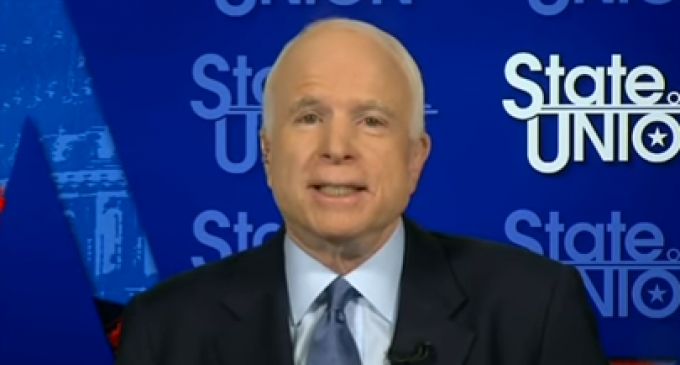 In the most recent McCain anti-Trump rant, the Arizona senator reared both his head and his handy white flag in friendly territory…on CNN, of course.  McCain's newest Trump snarky and condescending tirade?  He wants the president to release his tax returns.

The senator, as has been evident for as long as Trump has been a viable candidate for the presidency, has an especially volcanic grudge when it comes to the former-real estate mogul.  Mount McCain will sit silent for weeks and then suddenly begin spouting his Liberal-tainted ashy dirt regarding some aspect of Trump's personality or policy.

At first, it's easy to point to the old tried-and-true fallback position of, “Well, that's just McCain.”  Similar to the attitude that Leftists had in reference to, “Well, that's just Uncle Joe,” every time Biden would shoot off his mouth about [pick a subject].

When it comes down to brass tacks, though, and we begin to dig deeper into the heart of the problem that McCain apparently seems to have with President Trump, there is evidence of a darker scenario that begins to take form.  No normal person goes after another this often without there being a deep-seated anger or resentment regarding the latter.

Let's delve a bit into this issue and see if we can't discover a pattern of behavior that appears to be haunting McCain like an MSNBC ghost.

We begin with this latest little tiff about the tax returns.  Most have heard the Liberal calls for Trump to release his tax returns.  This is old news.  What many are not aware of is that there is NO ELECTION LAW THAT REQUIRES A PRESIDENTIAL CANDIDATE TO RELEASE TAX RETURNS.

This is an important note because the press will never readily admit this fact up front.  The point of that action by the mainstream media is evidence that they are not interested in the very least about truth or actual news, but rather more interested in sensationalism of “fake news.”

McCain is well aware of this and yet, continues to appear on Establishment-friendly networks to bash Trump over this non-issue.  If no law rests on the books of our electoral system, why push the subject?  The underlying reasons are like the multiple layers of onions being peeled away to reveal the rotten inner core.