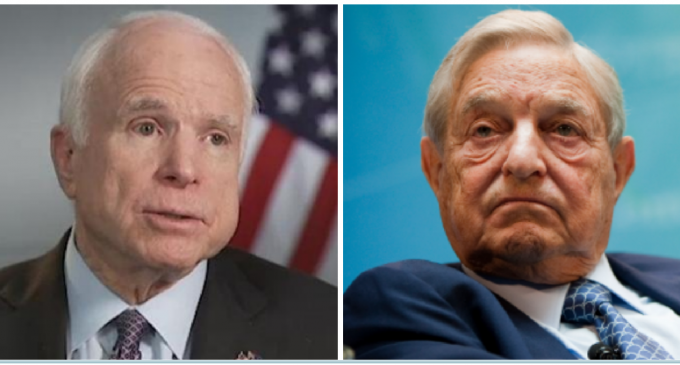 The Clintons are masters of the con.  It's something they have honed to a keen edge with the added ability to be able to hide the evidence.  That's really the essential part of scamming and money laundering is the obscuring from prying eyes any impropriety.

It appears that John McCain has taken some pointers from the old shysters as he has also created a foundation in his name and linked it to Arizona State University.  In 2008, when McCain lost the election to Barack Obama, the unspent funds of $9M were turned over to the McCain Institute for International Leadership.  Its so-called purpose was a McCain legacy organization that would be “dedicated to advancing human rights, dignity, democracy and freedom.” It is a tax-exempt, non-profit foundation with assets valued at up to $8.1M.

Ordinarily, this would not raise eyebrows because this is what politicians do. They take a load of money from different sources, plop it into a foundation or some other type of institute and allow others who are duly impressed by its existence to begin making huge donations to it based on the issue-of-the-day that it happens to represent. McCain, just like any other tax-and-spend Liberal or Establishmentariat member is well-familiar with how to launder money and is all too cozy with different doing things that are not always exactly on the up-and-up.

Back in 1989, McCain was swept up in an embarrassing scandal known as the Keating Five, which permanently damaged his clout and reputation. Although he was exonerated from having acted improperly, he was criticized for utilizing poor judgment. McCain ran for reelection, retained his seat, and subsequently ran for president twice. On a side note, it's been uncovered that he may even have won the presidency back in 2008 due to illegals being tallied at a tremendous count to nearly six million Democratic votes.

Regardless, his past dictates that everything McCain does should be up to intense scrutiny. Let's not forget that it was McCain who turned over the infamous Trump-Russia Dossier to James Comey at the FBI. He is also notoriously loyal to sticking it to his own party in order to side with the Liberals in Congress.

As for his International Leadership Institute, read more on the following page to find out the shocking names of people who have been donating to this legacy.