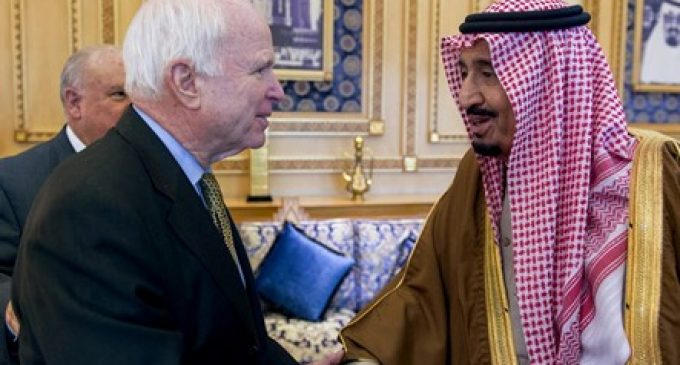 John McCain is back in action in the Swamp, participating in a very important health care vote that, of course, Susan Collins (RINO-ME) and Lisa Murkowski (RINO-AK) had decided to stonewall, despite the knowledge that the legislation would pass nonetheless with Vice President Mike Pence's tie-breaking vote.  Basically, it was the two RINOs' way of appeasing the Left by saying they voted against it, when in fact, they knew that it would pass.  Good move, ladies!  I'm sure the Leftists love you now.

However, Senator McCain, in spite of voting to advance the bill, still managed to shoot off his mouth about how he hated the legislation.  In other words, McCain is back and the Swamp is back to normal.

With his return to Congress, other questions which have been ruminating on the cusp of the conversations about Establishmentariat Swamp dwellers and their multitude of “institutions” that are supposed to be used to advance humanity and end oppression.  The reality of these organizations is that more and more of them appear to be exact duplicates of the schemes that helped to form and cultivate the pay-for-play methodology perfected by the Clintons.

John McCain (RINO-AZ) is one such individual who has multiple eponymous organizations (meaning they bear his name) that are raising questions about the legitimacy of their intentions and the trustworthiness of these elected officials who appear to be benefitting greatly from the donations that are pouring in from questionable sources.  McCain's newest installment of “global initiative-based organizations” is raising quite a few eyebrows.

Turn the page to read more about McCain and his curious interests around the globe that appear to be directly affecting his decisions in Congress.