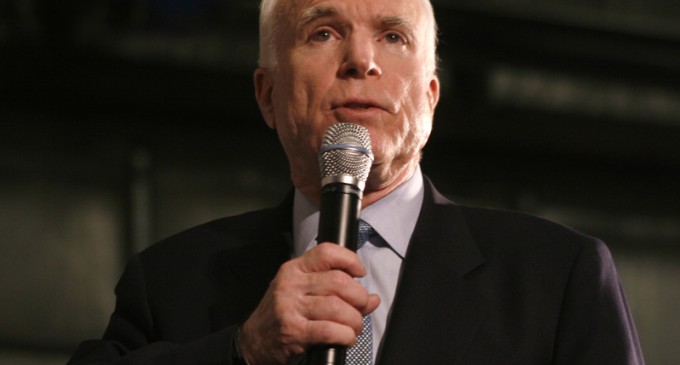 RINO Senator, John McCain has once again turned his back on US military veterans, choosing instead to fund visas for Afghani interpreters and their relatives, while imposing higher health care costs on our soldiers.

The legislation, given full support by McCain and proposed by New Hampshire Senator Jeanne Shaheen (D) will up the amount of Afghan Special Immigrant Visas for those who have helped the U.S. soldiers as translators and interpreters.  With this amendment, the number grows from 7,000 to 11,000 and the spouse and children of the visa holder may also enter the United States.

Where will the funds come from to make these new visas possible?  Congress has decided to hurt the veterans by cutting their health care benefits and increasing their co-pay for the pharmacy, while using the funds saved to make the visa program larger.

This is more of the same from McCain, the vet who should be ashamed of his pilfering toward his fellow military man or woman.  There were recently nine Republicans who sided with the Democrats to sell out the vets, sadly McCain was one of them.

We expect the Democrats to sell America out. It’s news when one or a handful actually vote in the interest of the American people and in a manner consistent with the Constitution and the very survival of our nation.

It’s also newsworthy to report on Republicans who join the Democrats in their sellout.

In the debate over cuts to the budget and who would be affected, the Democrats naturally targeted America’s military. They recognize and largely oppose the anti-American behavior coming out of the Democrat Senate and White House. They are not the constituency of the Democrats, at least not as far as the Dems seem to think.

Read more of the Afghan visa program that is stealing funds from the very soldiers who have served in the Middle East on the next page.