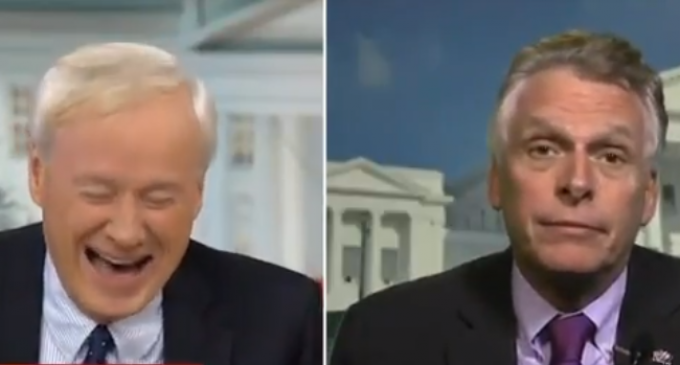 Outgoing Virginia Gov. Terry McAuliffe (D) can’t quite seem to make up his mind about President Donald John Trump.  This out-of-his-mind kooky liberal and Clinton family friend got caught on hot mic recently trying to convince foreign investors in Germany that the U.S. people hated President Trump. Proudly bragging in liberal sing-song fashion that President Trump was an “embarrassment” to the New World Order, like a “crazy uncle in his attic”.  The left is going to need to make-up their mind, is President Trump an infirm mentally feeble old man living in “America’s” attic, or is he the dangerous threat to the New World Order they so loathe.

Gov. Terry McAuliffe dropped a zinger on how he would deal with President Trump if he ‘got too close'. Here is a hint – it is not the way one treats ‘an old Grandpa’ or ‘embarrassing uncle’.

Head on over to the next page to watch this stunning interview between Gov. McAuliffe and Chris [“Obama sends a thrill up my leg”] Matthews on what they fantasize about doing to President Trump