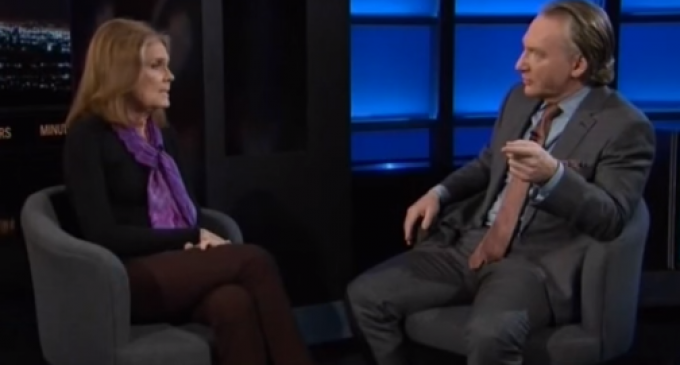 Feminist Gloria Steinem was asked by Bill Maher why feminists don’t make more of a cause out of how horrifically women are treated in Islam.

Hillary famously said when she visited China as First Lady, that woman’s rights are human rights, pointed out Maher to Steinmen.  He then asked her, “Is feminism something that goes past our borders?”

Steinmen responded, “Oh yes, absolutely, it is totally beyond borders.”  She praised Hillary going to China because not many supported her in going and her fight for woman’s rights was a global movement.

Maher next made his “gotcha move” asking, “Why aren’t the way women are treated in the Muslim world, considered more of a feminist cause?”

Steinman, affronted, said, “It is, are you kidding me, of course it is.  And women in those countries consider it a feminist cause.  There are woman risking their lives everyday.  All monotheism is a problem.”

The interview on the next page with Maher demonstrates the feminist hypocrisy when faced with the Muslim woman’s plight.