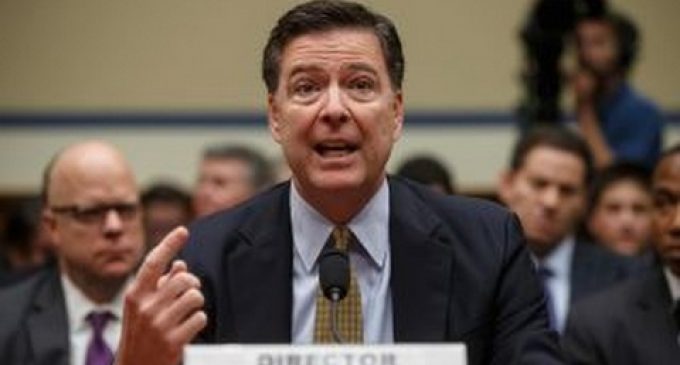 Former Director James Comey is back in the news with new information regarding the probe/no-probe decision by him during the waning days of the presidential election last November.  Speaking of which, in a mere five months, Trump will have been president and president-elect for one year.  If the current lackadaisical array of “alternative facts” continues to paint the political landscape like some really old and worn graffiti, investigators will have been at this “Russia Hack” story for an entire year with not a single shred of hard evidence that the Russians did anything at all.

It is increasingly worrisome, not to mention, that the Department of Homeland Security had its muddy paws digging into elections systems all the way back in January of last year at a time when Obama wanted the entire American elections network “designated” to be under federal control!  The pieces of the puzzle fit a hell of a lot more neatly into place when you begin looking at all the reasons for a DHS hack, as opposed to a hack from phantom agents in Russia.  As far as I'm concerned, Obama's shadow agents in the Department of Shadowy Endeavors (DSE) right down the street from the real White House are much more frightening than any Russian-planted phantoms.  They sure as heck weren't worried about the Russians when they had a foreign national from Russia working in D.C. on the Trump-Russia Dossier, now all of a sudden, we're supposed to be so scared of the big, bad Russians.

You also have to ask yourself about why committed Never Trumpers on the Right are also pushing this whole Russia-is-the-bogeyman agenda.  To me, that's more than enough evidence to say that it wasn't the Russians.  Plus, add into the fact that the DHS had ACTUALLY BEEN ATTEMPTING TO BREAK INTO THE ELECTIONS SYSTEMS…SPECIFICALLY...before this whole Russian concoction was brewed in the Obama White House.

Once again, Comey is making his own excuses as to why the Lynch-Clinton connection had the ability to knock him off his game and caused him so much confusion at the time of the investigations into Hillary's illegal email server.  For a guy who was so offended by Trump's insinuation that the FBI was in disarray and that Comey showed incompetence, he sure seems to be acting these days exactly like he was confused and in disarray, doesn't he?

To find out the newest reports of what he has recently told Congress members in private regarding his interactions with Loretta Lynch, turn to the next page…