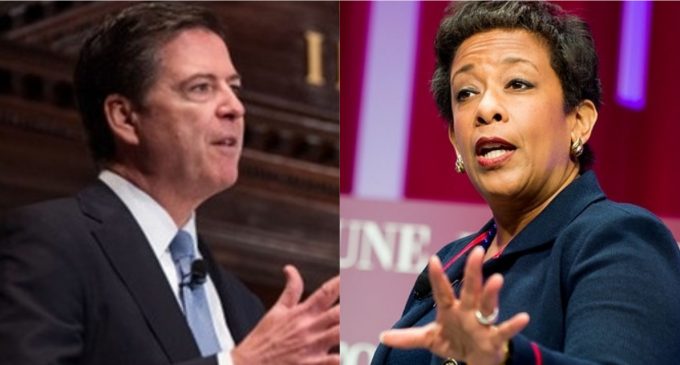 Former Attorney General Loretta Lynch is accusing former FBI Director James Comey of mischaracterizing her statements during his public testimony before the Senate Intelligence Committee in 2017 where he alleged that she privately instructed him to call the Hillary Clinton email probe a “matter” instead of an “investigation.”

More dissension in the Swamp. Just last week, after AG William Barr appointed U.S. Attorney John Durham to investigate the origins of the Russia investigation, Obama officials began to “Moe, Larry and Curly” one another.

It all began with a Brennan surrogate went for an eye poke on Comey in the news media. But the fray really kicked off after Fox News reported on an email chain from late-2016 revealing that Comey told FBI employees that it was Brennan who insisted that the ‘pee pee’ dossier be used in a January 6, 2017 U.S. Intelligence Community report.

A former CIA official then told Fox News: “Former Director Brennan, along with former [Director of National Intelligence] James Clapper, are the ones who opposed James Comey’s recommendation that the Steele Dossier be included in the intelligence report.”

The three Swamp Stooges are not the only ones engaged in in-fighting. Now Lynch has suddenly come out to accuse Comey of making false statements against her. The sound of impending drainage has the Swamp creatures in a tizzy.

Move to the next page to see Lynch try to distance herself from the coming tsunami.