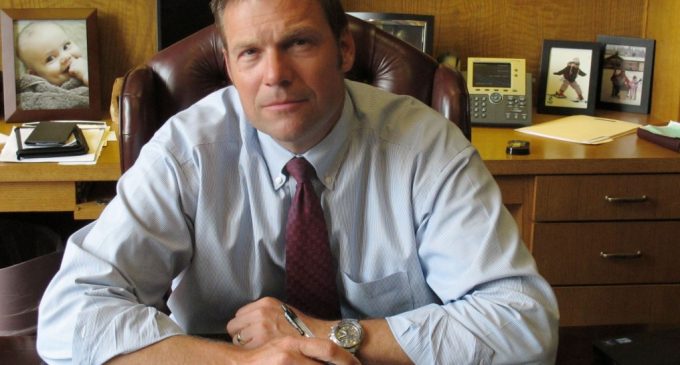 Candidate for governor of Kansas, Kris Kobach, has worn a lot of hats in the last few months.  He's the Secretary of State of Kansas, the Vice Chairman of the Presidential Commission on Election Integrity (the very same commission that Trump fooled the Jackass Party into demanding it be formed [because they thought HE committed election fraud]), coauthored the SB-1070 immigration law for Arizona and represented 10 ICE agents in federal court who sued to halt Obama's 2012 executive amnesty.

To say that he knows his way around the courtroom and federal laws is an understatement.  His expertise in particular on immigration has made him a feared and recognized member of the Republican Party, both Swamp RINO and faux-Conservative alike.

Recently, his exploits into the dark, seedy alleyways where Obama's Jackass Brigade formulates ways to steal elections in cahoots with George Soros, Hillary Clinton's underlings (because she cannot get her hands dirty of course), Debbie Wasserman-Schultz (in between visiting Imran Awan to discuss “his children” and “life in Pakistan” while he drives his Uber vehicle all around the Beltway) and the Democrat National Committee faithful, brought him to New Hampshire with the Election Integrity Commission.

There, he and his team discovered massive election fraud that tipped the scales in favor of the Democrat candidate (imagine that) in the race for the Senate, as well as the presidential choice where Hillary eked out a 2K vote victory.

Kobach speaks about this in a way that insinuates that the Republican Kelly Ayotte losing has somehow altered the balance of the Senate in favor of the Democrats.  What he's not going into, however, is the deeper story of why it was that a woman who should clearly have run away with the contest ended up losing by a very tiny margin.

Is it possible that her base opted to vote for another candidate completely based on some very humiliating statistics?  Turn to the next page to read more about this voter fraud and its between-the-lines implications!