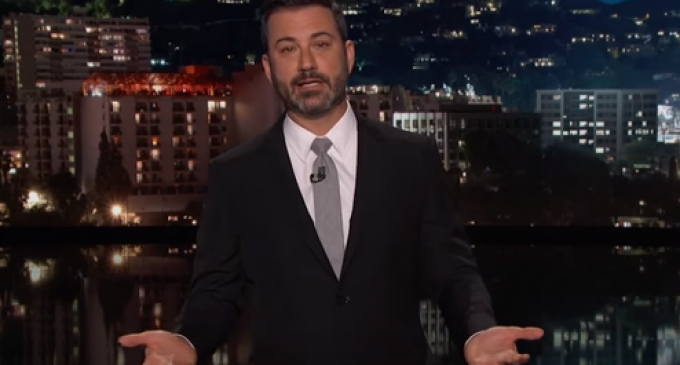 Leftist shill, Jimmy Kimmel, last night decided to once again insert his vapid, empty-shell celebrity-centric political opinions into his normal idiotic (and unfunny, laugh-track-like) monologue.  To use a Van Jones term, the resulting Whitelash that occurred because of his insensitive and morally reprehensible statements, was rapid-fire and deadly accurate.

In essence, the low-rated bomb of a talk show host was weighing in on the Las Vegas shooting and decided, as Leftists ALWAYS do, to turn a solemn and sad episode into a political agenda item platform for which he (apparently) now speaks from on behalf of an absent Congressional body.  I'm not sure when Kamala Harris called Kimmel and told him to get out there and, in the name of national unity, begin calling Republicans all sorts of names, but the call came in regardless and now Kimmel is the appointed “titular head” of the Party of the Jackass.

That being said, he comments last night were full of hatred, bigotry, racism, and vile, stereotypical intolerance.  But before we go into his terrible misstatements on behalf of the Leftocrats, let's take a look at the fact that Kimmel is, in fact, a serial bigot and this is proven by a series of headlines to show his ineptitude of realizing such!

Turn to the next page for the story of Jimmy Kimmel:  The Man and the Useful Idiot!