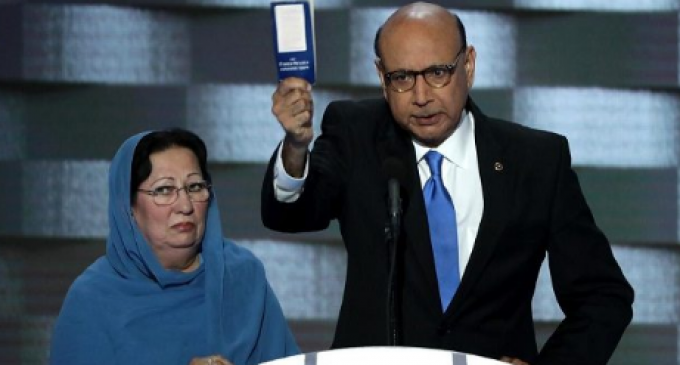 Democrats thought they found a dead-bang winner when Khizr Khan, a Muslim American and Gold Star father of a fallen American serviceman got up in the Democrat convention and railed at Donald Trump for being someone who had not sacrificed for the country and did not know what sacrifice was. He also claimed that Trump's desire to slow down immigration of Muslim individuals from the Middle East was unconstitutional, which it is not.

Kahn's performance was over the top, and Democrats went crazy with cheering and applause as Kahn “put it” to Trump, though Democrats are certainly not known for celebrating the military or their families. They were even more overjoyed when Trump had the audacity to respond to Kahn and say he had done a lot for the country in employing thousands, and he wondered why Kahn's wife had not spoken a word as she stood mutely by her husband during his tirade.

Trump's response sent the Democrats and the media into a frothing seizure of outrage. How dare he insult Islam and this upstanding patriot and father of a fallen American soldier! Many called for his immediate resignation from the campaign and the media declared that this was finally the straw that would break the back of Trump.

President Obama declared Trump “unfit” to serve as president over his remarks, and even some Republicans were aghast, with the “never Trumpers” once again bleating their negative nonsense. And it did seem like Trump would pay a price for his somewhat intemperate comments. But it turns out that this proxy for Hillary Clinton is as crooked and corrupt as she is, and in fact is extremely cozy with the Democrat candidate in a number of very shady activities.

Read more about Khan's connections with Hillary on page 2: