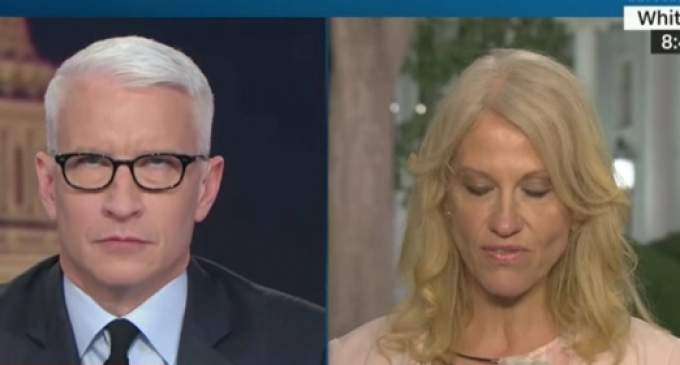 A day after her contentious back-and-forth with Anderson Cooper, Kellyanne Conway appeared on a few news shows to talk about the eye-rolling incident.  If you missed it, while Conway was speaking to Cooper, he had her sit through a montage of Trump rally clips that spanned approximately two minutes where candidate Trump was praising FBI Director James Comey for his re-opening of the investigation in the Hillary Clinton email server scandal.

When the montage was completed, Kellyanne smiled and said, “Thanks for the trip down memory lane, Anderson.  I remember being on your show last year during that time and telling you that we were going to win Michigan.”  With that, Cooper scoffed and rolled his eyes.  A half-minute later, while she explained further that the firing of Comey had nothing to do with the campaign, but with Trump’s loss in confidence in the director, referring to the letter that Trump had released in reference to the axing of Comey.  At that point, Cooper appeared to be looking off in the distance in a dismissive way, or he was gazing at his producer.  The look also appeared dismissive and rude.

The entire interview was riddled with heated exchanges, but the bulk of the interview involved Cooper continuously cutting off his guest before she had even begun to answer.  Can you imagine Cooper in an interview with a spokesperson for a Clinton White House (had she been the victor) continuously cutting off that person in an effort to get an answer that Cooper like better than the one he was receiving?  Exactly.  It would never happen.

Regardless, Donald Trump is not Hillary Clinton and the disrespect and attempts to delegitimize this president will not end or slow down until they are either satisfied with a full-blown “actual” scandal and impeachment proceedings, or the presidency ends after the term is up and Trump loses a second election.

Cooper has an audience to please and that audience is not bringing in a whole lot of bacon for the network.  Keep in mind that CNN was, once upon a time, THE premiere 24/7 news network with adoring Leftist fans from around the globe.  With its slick packaging and reporters with thick foreign accents in strange new locales, grimly serious and live, CNN won all the awards.  But that, of course, was when there was no competition.  Now the network languishes near the bottom rung of the cable news ladder.  Their tone toward Republicans (and Trump supporters and staff in particular) will not change.

While on Fox & Friends, she was asked about the interview and Conway explained why the segment annoyed her.