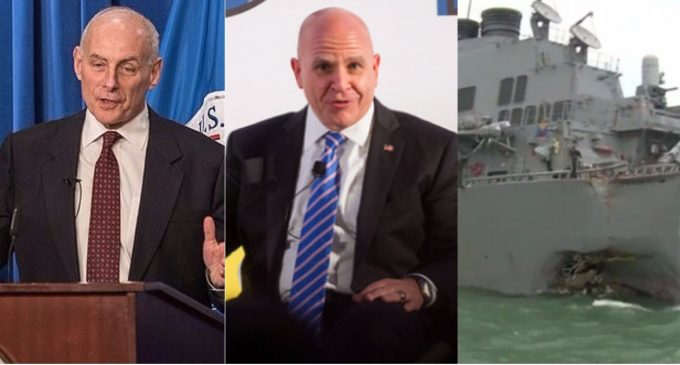 Earlier yesterday, the guided-missile destroyer USS John McCain collided with an oil tanker (merchant vessel Alnic MC) east of the Strait of Malacca and Singapore and the resulting accident caused the disappearance of 10 sailors and 5 injured.  This is a tragedy that possibly could have been avoided, but the reports about the incidents leading up to the crash are spotty.

The initial reports about the incident were received by both General John Kelly, Chief of Staff, and General H.R. McMaster, National Security Advisor, who were briefed on the incident.  Their job was to pass on the information to the President and from there, he would formulate an appropriate response for the nation.

Instead, President Trump tweeted a cryptic message “That’s too bad,” which apparently set off alarm bells in the Twitterverse.  The people lit up with critical responses that were rapid and seriously angry.

One thing that isn’t talked about, however, is the fact that the two most prominent individuals involved with military news and information that reaches the ear of the president, Kelly and McMaster, failed to brief the president on the details regarding the crash, intimating in a sense that the tragedy was more of “just a bumper crunch” between the ships!

Turn to the next page to read about the reactions of the generals and determine for yourself if this was a simple miscommunication or a concerted effort to place President Trump once again in the crosshairs of the Establishment!