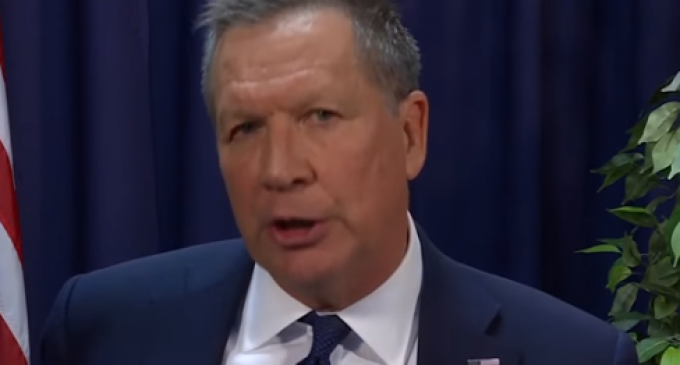 Every candidate in the Republican race in the 2016 election season has tried to find a way to stand out from the pack — some more successfully than others.

Jeb Bush strongly pushed the “steady hand” narrative, claiming that he had the executive background and temperament necessary to be commander in chief.  Bush tried appealing to voters by telling them that he was the only one with the necessary experience to be president.

Ben Carson was “Gentle Ben.”  Soft-spoken and self-effacing, Carson stood out by being the only candidate never to go negative in an election full of negativity.

Donald Trump has taken the “bull in a china shop approach,” always being on offense, never on defense.  Trump's no-B.S., take-no-prisoners, counter-punch-ten-times-harder approach has left many candidates and media members mangled on the tracks behind the Trump Train.

Then there's John Kasich.  Both Ted Cruz and Donald Trump have repeatedly called for Kasich to leave the race as he has no statistical chance of going into Cleveland as the nominee.  Kasich is instead banking on the prospect of a contested convention where he can emerge as some sort of savior of the establishment and win the nomination on a third or fourth ballot.

Kasich has also argued that he is the only one who can steal enough Democrats and moderates from Hillary Clinton to win the general election in November.  But to do this, the Ohio governor has taken many stands that have ostracized him from the Republican base.

Kasich's latest remarks regarding North Carolina's recent religious liberty law — which some believe is discriminatory towards those in the LGBT community — have further angered the conservative Republican base.  To watch exactly why Kasich is telling those in favor of religious liberty laws to “chill out [and] get over it,” continue reading on the next page: